Our client, a medical doctor from Miami, Florida, had come out to California for a wedding.  He had gone out to dinner with friends in the Pier Plaza area of downtown Hermosa Beach.  It was an uncharacteristically cold evening for June, so he was bundled up in a jacket and was wearing long pants.

Synopsis:  Public nuisance ticket dismissed, Hermosa Beach, client allegedly seen urinating in public, but he was actually just reaching in his pocket for his cell phone. 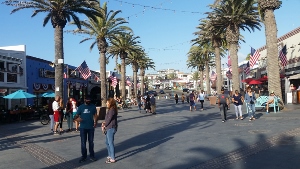 As the client and his friends returned to their car after dinner at a restaurant on Pier Plaza, they looked out over the city and marveled at how beautiful it is.  They could see the lights of the Redondo Beach area, as well as all the lights from the Pier Plaza area.  They decided to take a picture to remember the occasion once they returned to Miami.

As our client reached into his pocket to pull out his phone, a Hermosa Beach police officer walked up to our client and told him to stop urinating.  The client insisted he was not urinating at all, but just getting his cell phone.  The officer then handed him a ticket for public nuisance (Penal Code § 372), a misdemeanor.  The police officer said he saw our client unbuttoning his pants to urinate and then urinate.

In response, our client again explained that he was only reaching into his pants to pull out his cell phone.  To prove that this was so, he asked the officer to show him a wet spot on the ground if he urinated in fact.

The officer could not do so.  Our client then took photographs of the dry ground where he was issued the ticket.

The officer still handed our client the ticket, explaining, “Well, you will just have to sort this out in court.”  To our office this attitude seemed irresponsible and improper.  It seemed to show that the police were more interested in handing out tickets than making sure the tickets were actually for violations of the law.

Greg suggested that the client also attend ten AA meetings, even though he had not committed the offense, to help negotiate a dismissal.  The client understood the approach as a practical way to get traction in negotiating with the prosecutor.  After all, the doctor had a medical license that could be in jeopardy with a conviction for a misdemeanor.

Greg then appeared at the arraignment in the Torrance Superior Court.  He presented the Hermosa Beach City Prosecutor with the photographs from the evening the ticket was issued, as well as the AA sign-in sheet.

The Hermosa Beach City Prosecutor listened to Greg, looked at the photographs and agreed to dismiss the complaint in its entirety in the interests of justice under Penal Code § 1385.  The prosecutor, a nice guy, commented that sometimes, one must simply listen to the facts and he was trying to do so.

The client was pleased with the result.

While this case took place in 2014, now (2019) there is a remedy to having the court record of this case sealed.  Under the “CARE Act,” codified at Penal Code §§ 851.91 and 851.92, one can petition the court to order that the court records of this case be sealed so that they are not visible to the public.  There are certain exceptions to this new law, but it is worth reviewing if one finds himself or herself in a similar situation to our client in this case.