Our client, age 30, took his girlfriend out for dinner for her birthday and then to a bar in Hermosa Beach for a few drinks.  The two both lived in Paramount, so driving out to Hermosa Beach was something of drive, but it was for a special occasion.
Our client found a parking spot at a metered spot along 11th Street, which is the street perpendicular to Hermosa Avenue, the main north-south street.  Eleventh Street is also just one block south of the Pier Plaza area with all the popular bars such as Baja Sharkeez, American Junkie and Hennessey’s Tavern.  There is a large ground-level parking lot behind these bars on the south side of the Pier Plaza and there is a limited number of metered parking spots, too, along 11th Street itself.
After the two each had just one drink at American Junkie, they decided to head home.  It was just too rowdy and loud in the bar.  This was relatively early – it was only about 10:30 p.m. on a Saturday evening.
As the two returned to their car, our client decided he needed to urinate, so instead of walking back into American Junkie (which was still open) and braving a line for the restroom, he decided to just urinate by the parked car.
Just as he did this, a Hermosa Beach Police Department black and white car passed by and the officer looked over to see our client, with his back to the street, standing in a tell-tale way “with a steady stream of urine passing to the ground and splattering on the ground,” as the police officer described seeing in his report. 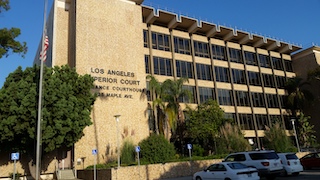 Torrance Courthouse
The officer stopped his car and our client looked over his shoulder to see the police car.  Our client zipped up his pants and apologized to the police officer.
The officer then issued our client a ticket for violation of Penal Code § 372, “public nuisance,” and had our client sign the ticket at the bottom, promising to appear in the Torrance Superior Court in about three months for an arraignment.
The client had no prior criminal history, so he was quite upset about this ticket and called up Greg Hill & Associates the following day.  The client spoke with Greg and described what had happened.
The client also described how having a criminal record for a misdemeanor could affect his job, but having an infraction would not be a problem.  He also stated he was worried about being on probation.
Greg explained how such tickets from Hermosa Beach are handled at the Torrance Courthouse by the Redondo Beach City Prosecutor’s Office on behalf of the City of Hermosa Beach.  Greg explained that many such tickets are resolved as infractions after the defendant makes a $550 “donation” to the “Hermosa Beach Nuisance Abatement Fund” at the Hermosa Beach City Finance Office and the court fees are often reduced to zero if the defendant attends at least ten Alcoholics Anonymous (AA) meetings.  However, Greg explained that there was no guarantee that the client’s case would be resolved this way, with the misdemeanor being dismissed. 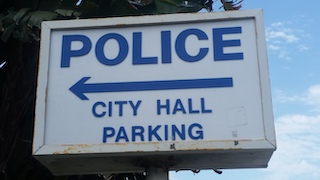 Police Station Hermosa Beach
Nonetheless, Greg recommended that the client attend at least ten AA meetings prior to the arraignment and give Greg proof that he did attend such meetings.  Greg would then show the Redondo Beach City Prosecutor this documentation and request that she amend the complaint to add a second count to the complaint for violation of Penal Code § 415(2) (“Disturbing the Peace by Making a Loud Noise to Disturb Others”) as an infraction.
The client then attended 15 AA meetings, five more than what Greg recommended, and provided Greg with the sign-in sheet for the meetings.
Greg then appeared on the client’s behalf at the arraignment and showed the Redondo Beach City Prosecutor the client’s proof of attending 15 AA meetings.  In response, the Redondo Beach City Prosecutor agreed to amend the complaint to allege a count two as an infraction for violation of Penal Code § 415(2) if the client made a $550 “donation” to the Hermosa Beach Nuisance Abatement Fund.  The case was thus continued for four weeks to give the client time to make “the donation,” which he then did and gave Greg the receipt showing this was paid.
Greg then returned to court and showed the Redondo Beach City Prosecutor the receipt for the “donation” and, true to her promise, amended the complaint to allege a second count as an infraction for violation of 415(2).  Count one, the misdemeanor for violation of Penal Code § 372, was then dismissed.
Greg then entered a no contest plea on the client’s behalf to the infraction and all fees and fines were waived by the prosecutor because the client had attended 15 AA meetings.
The client was very happy with this resolution and confident that it would not present an issue with his job.
For more information about public urination issues, please click on the following articles:
Contact us.
Serving Torrance, Long Beach, Compton, Airport Courthouses and Other Courthouses.