Our client, age 23, was walking home to his apartment a few blocks from the downtown Hermosa Bars.  He had enjoyed an evening with friends from high school.  The evening had stretched on into the night and he had consumed more beer than he expected. 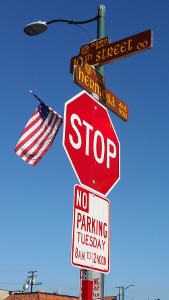 As he was walking home, south of the Hermosa Pier at 10th Street, he decided to urinate on a building wall that he thought was discreet and out of view of the passing cars.  As his luck would have it, he was visible to a Hermosa Beach police officer driving by, who stopped.

In 35 Words or Less:  Client, a school teacher, receives a ticket for public nuisance (Penal Code § 372) for urinating in public in Hermosa Beach.  Case resolved for an infraction for disturbing the peace, Penal Code § 415(2).

The officer walked over to our client, who was creating a puddle by his feet.  The officer said, “excuse me, sir” and gave him a ticket for violating Penal Code § 372, public nuisance.  He asked our client to sign a promise to appear in court in the Torrance Superior Court in a few months, which our client signed because the officer advised him that if he did not sign, he would have to be arrested and taken to the police station.

The client was quite nervous about what a misdemeanor would mean for him, as he was a school teacher.  He had no prior criminal history.  He called up Greg Hill & Associates about a week later and explained what had happened.

Greg explained that because the client had no prior criminal history and the misdemeanor offense at issue was eligible for judicial diversion, Greg could request this from the judge.  Greg explained that to be on judicial diversion, however, one needed to first enter a plea to a misdemeanor offense and then later, the plea would be withdrawn and the case dismissed.

Alternatively, one could request a plea bargain from the Redondo Beach City Prosecutor (Redondo Beach handles the Hermosa Beach misdemeanors) that involves a plea to an infraction, but that it is a conviction nonetheless.  The advantage of the infraction is that there is no probation and the conviction can be expunged after a year.

Greg explained that due to his professional licensing issues, having a teaching credential, he should speak with a licensing attorney who is familiar with school teachers and ask that attorney what is best – an infraction or judicial diversion, but with a plea to misdemeanor public nuisance.

The client did so and was advised that an infraction was preferred.  Greg then recommended that the client attend ten Alcoholics Anonymous (AA) meetings and write a letter of apology to the Hermosa Beach Police Department for his conduct.  Greg commented that while doing such things is good, it is not a guarantee that his court fines and fees would be waived, but that in the past this has taken place.

The client did both these things and Greg appeared at the arraignment at the client’s behalf in the Torrance Superior Court.  The client stayed at work.  Greg read the police report and discussed the case with the Redondo Beach City Prosecutor who was there.  She was respectful and did not characterize the case as “aggravated public urination” as is common with such cases.

Greg showed her the proof of attending ten AA meetings (the sign-in sheet) and the short letter of apology.  The prosecutor then said, “so he’s seeking judicial diversion?”  Greg said no and explained why his client sought to resolve the case with an infraction.

The Redondo Beach City Prosecutor then kindly said she would agree to reduce the charge to an infraction violation of Penal Code § 415(2), disturbing the peace by making a loud sound, if the client made a $550 donation to the Hermosa Beach Nuisance Abatement Fund.  She then agreed to waive the normal $50 court fine (which with penalties and assessments equals $350) because of his attending ten AA’s and writing the letter.

It was a good offer and our client gladly accepted this.  The case was then continued for about six weeks to allow our client to make the $550 donation, which he did.

Greg then returned to court and showed the Redondo Beach City Prosecutor the receipt for making the donation and the prosecutor amended the complaint to allege a count 2 as an infraction for violating Penal Code § 415(2).  Count 1, the misdemeanor, was dismissed.  The client then entered a no contest plea to the 415(2) as an infraction.

The client was pleased to resolve the case as we did and looked for to requesting expungement in one year.