Our client from Nigeria loved the bars and restaurants of Hermosa Beach.  He thought he had died and gone to heaven.  He was not a U.S. citizen, but he worked as a computer technician for a local college in Los Angeles and was hoping to become a U.S. citizen some day.  At age 31, he had lived in his native Nigeria and then studies computer science in London, so he had seen quite a bit of the world.
On a warm summer evening in July, as was his custom, he went down to Hermosa Beach to meet up with some friends from Nigeria to watch English soccer at the Underground, which often showed Premier League matches. 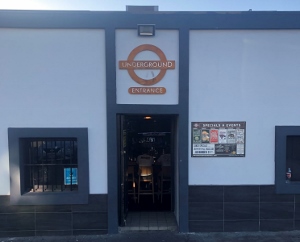 The Underground in Hermosa Beach
He and his friends enjoyed a typical evening and it was nearing midnight.  Our client decided to catch an Uber home.  As he was walking down from the back alley of the Underground Pub toward Pier Plaza, he realized he needed to urinate.  Since he was familiar with the area, he felt confident that he could quickly urinate behind a trash dumpster without being seen.
Our client did so and was suddenly asked by a male voice, “are you urinating, sir?”  Our client finished up doing his business and turned around, much to his surprise, to see a uniformed Hermosa Beach Police Department police officer standing behind him, holding a notepad.
Our client zipped up his pants and quickly understood why the officer was there.  Our client knew it was illegal to urinate in public (in the U.K., due to the frequent rain that washed away urine almost daily, it was not illegal and in Nigeria is was legal).  He apologized to the police officer.
The officer then asked for our client’s identification and proceeded to write out a citation for a misdemeanor violation of Penal Code § 372, “public nuisance.”  The officer then pulled out hand sanitizer from his pants pocket and applied it to his own hands after handing back our client’s ID.  The police officer then asked our client if he’d like a bit of hand sanitizer, too, which our client accepted in an embarrassed manner.
The officer then asked our client to sign the ticket as a promise to appear in about two months in the Torrance Superior Court.  Our client did so and left, quite confused about what would happen next.
The very next day, he called Greg Hill & Associates and spoke to Greg about the ticket.  Greg listened to the client explain what had happened and how he was here in the United States on a Green Card.  Greg then described what has happened in the past on such tickets at the Torrance Courthouse, explained the difference between a misdemeanor and an infraction, and recommended that the client attend ten Alcoholics Anonymous (AA) meetings before the arraignment.  Greg then quoted the client a reduced fee because the client seemed like a nice guy.
Greg then did not hear from the client until about four days before his arraignment.  The client now wanted to retain Greg Hill & Associates to defend him.  However, he had not attended any AA meetings at all.
He then retained Greg Hill & Associates and Greg went on his behalf to the arraignment at the Torrance Superior Court.
The Redondo Beach City Prosecutor, who handled cases in Torrance for both the City of Redondo Beach and Hermosa Beach, agreed to amend the complaint, which only alleged a misdemeanor violation of Penal Code § 372, to add an infraction-level violation of Penal Code § 415(2) if the client attended ten AA meetings and made a $550 “donation” to the Hermosa Beach Nuisance Abatement Fund.  There would then be a $10 court fine, plus penalties and assessments that totaled approximately $165.
Greg therefore asked the judge to continue the arraignment for about four weeks to allow our client the time to attend ten AA meetings and make the $550 Nuisance Abatement Fund “donation.”
For more information about public urination, please click on the following articles:
Contact us.
Serving Torrance, Long Beach, Compton, Airport Courthouses and Other Courthouses.