Our client had spent an evening with his friend, drinking beer and watching his beloved New England Patriots on television.  As he was walking back home from the bar in Hermosa Beach, he decided to relieve himself in an alley, where he thought no one could see him.  After all, he stepped into the shadows where he intended to be hidden to some degree from the public.  He was about three blocks east of Pier Plaza, up the hill and to the south of Pier Avenue.

Without All the Details, What Happened?:  Our client is cited in Hermosa Beach for “public nuisance” (Penal Code § 372) after police see him urinating in public in an alley about three blocks away from Pier Plaza.  He is charged in Torrance Superior Court with misdemeanor public urination.  The case was resolved for an infraction-level violation of disturbing the peace (Penal Code § 415).

Just as he began to urinate, a police car entered the alley.  The car’s headlights illuminated our client, making it easy for the police officer to see exactly what our client was doing.  Any intent to remain in the shadows was meaningless with such bright headlights shining right at our client. The police car was perhaps only thirty feet away.  It was a nightmare of sorts for the client, standing with his pants unzipped and urinating with bright lights shining on him.

The police officer issued our client a citation for a misdemeanor violation of Penal Code section 372, public nuisance.  The client was asked to sign a promise to appear in the Torrance Superior Court on a date the police officer wrote on the ticket, which he then handed to the client. 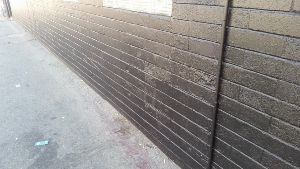 Our client was very concerned about having a conviction on his record, as he was applying for a job with several prestigious companies at the time.  He was also worried that being on probation, even if only informal, or summary, probation, would negatively affect a potential employer’s opinion of him.  An employer may have concerns that an employee on probation could violate probation and be taken to jail, missing work for an uncertain period of time until the case is resolved.

Our client was also quite worried about the simple nature of the crime, “public nuisance,” which he thought would only lead to questions from an employer about exactly what he did to earn such a conviction.  What kind of nuisance?  What did he do that have such an effect that the police cited him for this?

When the client called us, he was most anxious about what he had read online – that a conviction for public urination can lead to a requirement that one register for life as a sex offender.  Greg responded that although unusual, a prosecutor can request that the judge impose such a requirement under Penal Code section 290.  Such registration is a lifetime obligation (although in 2022, the obligation is going to change into ten year, twenty-year and lifetime periods).  Greg the commented that he had never once seen such a requirement be imposed in a public urination case.  Indeed, we would expect that if the nature of the public urination is more akin to indecent exposure and the client’s primary interest is in the response of others and not simply just urinating, then maybe the requirement could be an issue.

The Hermosa Beach City Prosecutor respectfully listened to Greg describe the case and then graciously agreed to resolve the case as an infraction for disturbing the peace (Penal Code section 415), which was good for our client, as once he paid the $100 fine, plus penalties and assessments, he would have no other obligation to the court.  There is no probation associated with an infraction.  In contrast, had he been convicted of a misdemeanor, he would be obligated to serve time on summary probation.

Our client immediately accepted the plea bargain offered, relieved that his lapse in judgment one night in Hermosa Beach would not scar his criminal history with a misdemeanor conviction.