Our client, age 24 and in the United States on a work visa from Australia, decided to enjoy the night life of Hermosa Beach.  He went to a few different bars and admittedly drank quite a bit.  He decided to go walk out on the pier, as the night was warm and inviting.  It was nearly 2:00 a.m.

The Gist of This Summary:  Client arrested for urinating in public on palm tree on Pier Plaza and being, in the arresting officer’s opinion, so intoxicated as to care for his own well-being.  Case resolved for misdemeanor, with a $150 fine plus penalties and assessments, but with just one day of probation.

He headed out the door of Patrick Molloy’s and headed toward the beach and the pier.  However, as he walked, he realized he needed to urinate, so he decided to urinate near a palm tree on Pier Plaza.  The client was not as inconspicuous as he believed he was, as a Hermosa Beach police officer on foot spotted our client and walked over to him. 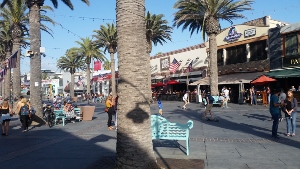 The officer then asked our client to give him his driver’s license and the client handed the officer a blank card.

He was then arrested and taken to the Hermosa Beach police station, where he spent the evening before being released in the morning.

Greg then explained what he expected the way that the Redondo Beach City Prosecutor’s Office often handled such cases, the possible punishment and what the client could do now to help with his case.  Greg recommended that the client attend at least ten Alcoholics Anonymous (AA) meetings prior to the arraignment date.

When the arraignment date came, the client had not attended any AA meetings.  Greg discussed the case facts with the Redondo Beach City Prosecutor present in the Torrance Superior Court, who offered to dismiss the public urination case, but offered our client a plea bargain on the public intoxication case of two years of summary probation, conditioned on the client paying a $300 fine, plus penalties and assessments (total of about $1,350) and paying the $358 Hermosa Beach booking fee.

Greg realized the case was not eligible for diversion under Penal Code § 1001.1 because it involved the use of alcohol, so he asked if our client could “earn” an infraction by pleading to public intoxication and doing 20 AA meetings as well.

The Redondo Beach City Prosecutor said no, but lowered the plea bargain terms to probation terminating upon our client paying the booking fee and court fine, which she lowered to $150, plus penalties and assessments (total of $750).

Greg relayed the offer to the client, who accepted the offer.  Greg was not happy with this offer, but the client could reduce his probation period to a single day if he promptly paid the booking fee and court fine, which the client agreed he would do and then did so.

This case summary is meant to illustrate how offers vary by prosecutor and the facts, as this offer from the Redondo Beach City Prosecutor’s Office was made when our client did not follow our advice to attend ten AA meetings prior to the arraignment.  The prosecutor present was also not the usual prosecutor from the Redondo Beach City Prosecutor’s Office, so the offer from her was unusual.
For more information about public intoxication and public urination, please click on the following articles:
Contact us.
Serving Torrance, Long Beach, Compton, Airport Courthouses and Other Courthouses.