The bars and restaurants had just closed and the group decided to take a short cut through the opening in the buildings near the FFFF Restaurant and Bar.  This is to the north side of the Pier Plaza and allows one to walk to the multi-structure, new cement parking structure north of the pier. 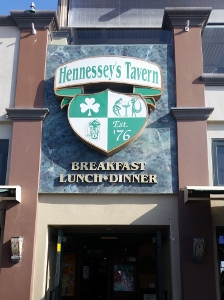 Hennessey's Tavern in Hermosa Beach
Our client had just traversed the small parking lot behind FFFF, when the urge to urinate took over.  Our client found a spot in the shadows, near a wall, that he hoped would not be visible to anyone nearby.  Just as our client began urinating, a Hermosa Beach Police Officer on foot rounded the corner from the alley and spotted our client.  The officer immediately went over to our client and ordered him to stop urinating.
Our client was outraged, as he did not actually urinate at all, but he received a ticket for this.  He was certainly planning on doing so, but was stopped while he was in the process of unbuttoning his fly.

His friend, nearby, however, had urinated and was ticketed, too.

Our client insisted to the police that he was innocent and that the police were too quick to conclude what was happening.  The police officer smirked, “Tell it to the judge” and handed our client a ticket, asking him to sign the ticket as a promise to appear in about four weeks in the Torrance Superior Court.  The officer explained that if the client did not sign the ticket, he would be taken to the Hermosa Beach city jail and held until court on Monday or Tuesday.  The client then signed the ticket, unsure if he was admitting to a violation of the crime.

The client came to Greg Hill & Associates the next day, more angry than ever.  He knew he needed to have an attorney fight for him every step of the way, more so about the principal perhaps than anything else.  He was angry that the police officer was flippant with him and did not seem to listen to our client protesting that he had not even urinated at all.

Our office listened to the facts and immediately wrote letters to the Hermosa Beach Police Department and the Hermosa Beach City Prosecutor’s Office about the incident and demanding copies of the police report, although the arraignment in the Torrance Superior Court was a distant two months away.  In the letters, we explained that our client had not even urinated but the sarcastic police officer dismissed our client’s claim, smugly saying “Tell it to the judge.”

Our goal in writing such letters, besides seeking the police report, audio tapes(s), video tapes and 911 call(s), if any, is to let the police and prosecutors know our client is represented by counsel and that if the case is weak, to reconsider filing because if fought, the police may be revealed as having made a mistake, undermining public trust in our police.

At the time the ticket was given to our client, there were more than one trial demanded by defendants for the same charge.  The defense in each case was the same: “I never urinated.  The officer was too quick to hand me a ticket.  I told him this and hejust responded by saying, sarcastically, ‘tell it the judge.’”  This ticket to our client seemed like nothing more than the same scenario.

Our office also discussed the case with the Hermosa Beach City Prosecutor’s Office before the arraignment.  The prosecutors were surprised at our interest in such a small, minor misdemeanor and politely agreed to look into the case further.

Our efforts were rewarded when the Hermosa Beach City Prosecutor’s Office mailed us notice that the case would be dismissed.

Our client was quite happy.  As a former Marine, he was just getting started in his post-military career in security and a misdemeanor conviction would have set him back to looking for another job.