Our client, age 26, was visiting friends in Hermosa Beach.  He came to town from Texas, where he was employed for a major oil company as an engineer.

He and his friends went to Downtown Hermosa Beach, where they visited several bars before deciding to have a light dinner at a Mexican restaurant in the Pier Plaza area.  Once in the restaurant, the group continued drinking.  Our client then got up to use the restroom.

As the client returned from the restroom, he walked back with his pants still lowered.  He did not do so in a manner to show others or, as the waitress said, “I don’t think he meant to offend anyone.  He was just very drunk.” 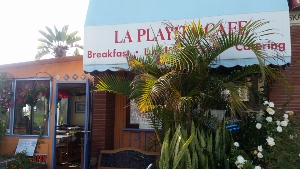 Popular Mexican Restaurant in Hermosa Beach
The waitress then called the Hermosa Beach Police Department, which arrived and found our client sitting with his friends, but now with his pants in the proper position because his friends ridiculed him.

The police then arrested our client, who quickly apologized and begged the officers not to be taken into custody.  After all, he had a plane ticket for a return to Texas the next morning, and he panicked by thinking he might miss his flight home.

The officers seemed to ignore our client’s plea for leniency and hand cuffed him.  They then took him to the Hermosa Beach Police Department, where he spent the night to “sleep it off.”

When the client was released, he quickly hustled to LAX and back to Texas in fear of losing his job.  He was released from jail with a promise to appear back in the Torrance Superior Court in about two months.

About a month after returning to Texas, the client called Greg Hill & Associates.  He spoke with Greg Hill about the arrest, his worries about losing his job due to a misdemeanor arrest and how he would be able to best have the court treat him with leniency.  The client believed that he was arrested for indecent exposure, so he was worried about having to register as a sex offender for life.

Greg explained the law on indecent exposure and how his attending Alcoholics Anonymous (AA) meeting would help.  Greg was puzzled about how the client could be arrested for indecent exposure when police allegedly told him that they thought he was too drunk to even know his pants were down.  The police even told him that he did not seem to care about any response from anyone else.  He did not even do so to be funny.

Greg told the client that he though the Redondo Beach City Prosecutor’s office would instead charge the client with just public intoxication, a violation of Penal Code § 647(f), but still a misdemeanor.  Greg set his fee quite low, in expectation of this.

At the arraignment, Greg appeared for the client, who remained in Texas.  The case indeed was filed as a single charge of public intoxication.  The file records showed that the client had no prior convictions.

Greg then filed a Motion for Imposition of Diversion under Assembly Bill (AB) 2124, which is provided for at Penal Code § 1001.94 to 1001.98.  This pilot program, only available in Los Angeles County, permits the judge, over the prosecutor’s objection, to order a delayed entry of judgment for certain low-level offenders.  The program is not available for anyone with a charge of DUI, domestic violence, certain sex offenses, or anyone with any conviction in the last  ten years.  The judge has the discretion to grant or deny such diversion.

Greg filed a written motion for imposition of diversion.  The judge denied it, reasoning that the case was not special enough to merit diversion.  In other words, there was nothing in the judge’s view that mitigated the conduct, although the motion did show that the client attended ten AA meetings.

The Redondo Beach City Prosecutor was just as shocked as Greg was that the judge imposed such an additional requirement to her ruling or whether to grant diversion.  Consequently, the City Prosecutor offered to amend the Complaint to allege an infraction-level violation of disturbing the peace, (playing loud music), a violation of Penal Code § 415(2).

The plea included an obligation to pay a $150 fine, plus penalties and assessments, for a total of $720.  The client paid this immediately, happy to avoid a misdemeanor conviction that would have ruined his career.