Our client then accelerated forward, in full view of the female officer. As he did so, he laid down his motorcycle. He was not hurt. 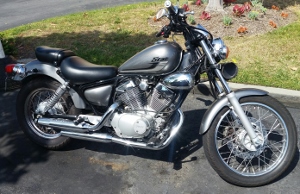 The female officer approached our client on the ground and struggling to get up. She smirked and sarcastically told him on a recorded microphone, “that’s what happens when it is wet, huh?”

The fall took place outside the rear of a bar. The area smelled like alcohol, but the officer commented, “I can smell alcohol. You have been drinking. Don’t deny it. How much did you drink?”

Synopsis:  Hermosa Beach, motorcyclist crashes and then refuses to submit to breath or blood test, resolved as a wet reckless.

Our client, age 31, repeated his prior response. This greatly infuriated the police officer, planting within her a mission to arrest our client for DUI for his audacity. She proceeded to test him on field sobriety tests, which anyone jarred and bruised from a fall to the ground would fail. She attributed his failure to the effects of alcohol instead, as expected.

She also asked our client to submit to a Preliminary Alcohol Screening (PAS) device. Our client said he would not, as is his right at the scene. This set the police officer into a further rage because our client was not intimidated by the officer’s theatrics. She then warned him that if he did not take this or a blood test he would lose his license. Our client responded, “I don’t think I need to do that here.” This is correct.

The officer then spun our client around and handcuffed him. When he got to the station, a station security film shows the officers failing to offer our client a breath or blood test. One officer said, “he refused it at the scene.” But no further attempt was made by the officers to secure either test. This is a common error by the police.

The Hermosa Beach City Prosecutor correctly observed the flawed methodology of the police and offered our client a plea to Vehicle Code § 23103, pursuant to 23103.5. This is a wet reckless. Our client, knowing he had a chance at trial, but wanting closure on the case, accepted the offer. The charges of DUI were dismissed.

Because our client pled to a wet reckless, he avoided the requirement to install an ignition interlock device on his car, which he was happy to avoid. It merits mention that one cannot install an IID on a motorcycle, but had our client been convicted of DUI, he would have had to stop riding his motorcycle or buy a car and install an IID on it for the five months required by the DMV.

For more information about a wet reckless, refusing a breath or blood test and DUI stops in general, click on the following articles: