Our client, a 32 year old male, was charged with misdemeanor violations of Penal Code sections 243(e)(1) (battery upon a person with whom he had a dating relationship) and 242 (simple battery).  The charges arose from an alleged incident where a person, who hated our client, claimed our client was strangling his girlfriend in the street within view of the witness. 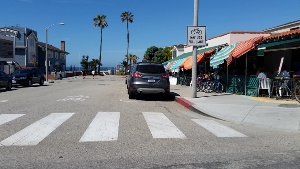 The case was problematic because our client had been arrested, but never charged, with domestic violence upon the same woman two and a half years earlier in another city in the Los Angeles area.  Under Evidence Code section 1109, the Hermosa Beach City Prosecutor gave notice that he intended to introduce evidence of such “other bad acts” evidence at trial.

Trial was notable because the supposed victim disappeared at time of trial.  So the alleged witness’ testimony would be the only way to convict our client.  Then on the first day of trial, the prosecution announced that they had miraculously found an audio tape of our client confessing the crime in a phone call with the Hermosa Beach Police.

Greg Hill prepared and filed three written motions in limine (requests to exclude certain evidence) that would prove to be crucial in settling the case during trial.  First, he filed a motion to exclude any evidence of the “other bad acts” because of the hearsay evidence that necessarily would be involved, especially since our client’s girlfriend was not available for trial.

Second, he filed a rather standard motion in limine for domestic violence matters – to exclude the use of the term “victim,” as it is commonly used by police and in the police report, as it is a legal conclusion and unduly prejudicial.

Third, and most important, Greg filed a motion in limine to exclude the audiotaped confession of our client, as our office had served a written demand to the prosecutor for any audio recordings two months earlier under Penal Code section 1054.1.

The prosecution wavered at trial and interrupted trial to spend time negotiating before any rulings on the motions in limine.  After several hours, the prosecution made an offer our client accepted, which was to plead to the 242 charge, which allowed him to maintain ownership of a large antique gun collection.  Had he been forced to plead to the 243(e)(1) charge, or convicted of it, he would have had to sell all his guns and he would most likely be disqualified from owning weapons for ten years under state law and a lifetime under federal law, under the Lautenberg Amendment to the Federal Gun Control Act of 1968.

The client, however, did agree to 52 weeks of anger management classes, a small fine and, a promise from the court that if he completed such classes and paid the fines, deferred entry of judgement and dismissal of the case. He was very happy, not only to avoid jail, but to keep his freedom to bear arms, hopefully in 52 short weeks.

For more information about domestic violence in general, what happens when a witness will not appear at trial, click on the following articles:
Watch our Video about Domestic Violence by clicking here.