Hermosa Beach, Client Sits in His Own Urine, Infraction 415

Our client, age 27, went out to downtown Hermosa Beach with several friends to watch a football game in one of the many downtown bars, have a few beers, enjoy some nachos and relax.

The game ended and the group decided to head over to the home of someone in the group that lived off 13th Street.  They walked along the Strand toward 13th Street and turned into 13th Street Court.

In a Nutshell:  Client, age 27, ticketed for public nuisance (Penal Code § 372) in Hermosa Beach, after police spot him urinating in 13th Street Court near downtown Hermosa Beach.  Case resolved for an infraction with a $550 donation to the Hermosa Beach Nuisance Abatement Fund and a $10 court fine.

During the entire walk along the beach, our client had the urge to urinate, but did not feel good doing so along the Strand with other people walking along the Strand as well.  But once the turned onto 13th Street Court, he thought he could do so with no problem.  Little did he know, but an undercover police officer had been following the group, just waiting for this to happen. 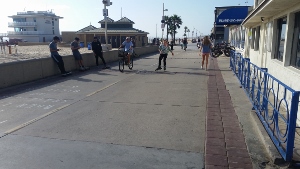 The Strand in Hermosa Beach
Our client found a sewer drain and a bush a few feet away.  He figured his urine would run down to the sewer drain and out of the area.  As he was urinating, with his right hand up in the air and his left hand by his crotch area, an officer approached him from behind and instructed him to stop urinating and sit down.  Our client was so shocked by this surprise, he did not even zip up his pants and immediately sat down, unfortunately in his own urine.

The officer handed him a ticket and asked him to sign the promise to appear in court in about two months.  The client knew this was serious, but decided not to focus too much on the implications of a misdemeanor.  He had suffered a DUI conviction in Wyoming in Teton County just three and a half years earlier, so he knew that might make resolving his public urination ticket, marked as a violation of Penal Code § 372 (“Public Nuisance”), tough.

He called Greg Hill & Associates and spoke with Greg Hill, who listened to the client’s story of what happened and then explained what would most likely happen and how the client could help his chances in court.  Greg explained that the client most likely would be ineligible for judicial diversion due to his DUI within the last ten years, which is a disqualifying factor stated under Penal Code § 1001.94.

Greg therefore had the bench warrant recalled.  He read the police report and saw that the client’s criminal history listed his DUI from Wyoming just three years earlier.  The Redondo Beach City Prosecutor did not notice this and offered to resolve the case with judicial diversion under Penal Code § 1001.94.

However, our client was quite apprehensive about having his case showing as a misdemeanor for the year of judicial diversion and preferred an infraction due to his job.  He was worried that with an open misdemeanor, he might be terminated.

Greg questioned whether a $50 fine was appropriate, as normally a $10 fine is imposed.  The Redondo Beach City Prosecutor exclaimed that this was a case of “aggravated public urination” because he sat down in his own urine.  Greg then pointed out that this only happened after he finished urinating and because he was following the orders of the police officer, who probably did not need the client to sit down anyways.  The Redondo Beach City Prosecutor agreed, but then pointed out that our client had failed to appear on the arraignment date.

Greg then explained that the court had changed the arraignment date to a later date ten days later, but the Torrance Court staff still held the arraignment on the wrong date and the judge issued the bench warrant by mistake.

The Redondo Beach City Prosecutor agreed again and reduced the court fine to $10, plus penalties and assessments ($146), which Greg paid along with the Hermosa Beach Nuisance Abatement Fund “donation.”  At the next hearing, the misdemeanor was dismissed and the case was reduced to an infraction.  The client was happy with this result.