Home
Other Information
Criminal Defense Articles
Got a DUI and Live Outside CA? What Is a 1650 Waiver?

If someone comes to California, or even lives here when that person is convicted of DUI, but later moves out of California, it can be frustrating trying to obtain a driver’s license in the new home state.  The DUI in California casts a long shadow, barring the issuance of a license in another state until the driver comes back to California to complete a DUI class in person in California.  Is there any way around this?  The answer is yes, through a 1650 Waiver.

The Reader’s Digest Version: A 1650 Waiver is a request for the California DMV to waive its requirement that the driver complete a DUI program in person in California.  The waiver can only be granted once in one’s lifetime.  Once submitted to the California DMV, it takes four to eight weeks to process.

Our office has represented many people who live outside California and who come to the Los Angeles area on a vacation or for business.  While here, they are arrested, charged and convicted of DUI.  The court then sends notice to the California DMV, which in turn suspends the defendant’s driving privileges in California and shares the information of the conviction with all other states that are signatories to the Interstate Driver License Compact. (Veh. Code § 15000 et seq.).  Georgia not a signatory, nor is North Dakota, Nevada (withdrew in 2007), Michigan, Wisconsin or Tennessee.
When a signatory state receives notice of the California suspension, it may then impose its own penalties on the driver, which can be even tougher.
The signatory states then treat the DUI that took place in California as if it took place in their state and may refuse to issue a license until the person satisfies the California DMV requirements for regaining a license.  This means one must show proof of financial responsibility (usually by showing insurance, but can also be by posting a bond) for the last three years (by filing an SR-22 form with the California DMV) and completing an approved DUI education program. 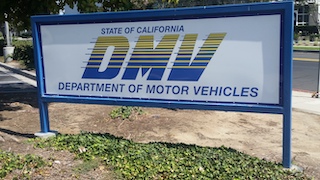 DMV Torrance
This is when such requirements become problematic.  The California DMV requires that the driver attend an in-person DUI education program in California.  Online programs may satisfy a judge for purposes of probation, but for someone living in New Hampshire, for example, it is tough to travel back and forth to attend a nine-month alcohol education program (AB1353) in California, let alone a three-month program (AB541, which in Los Angeles County involves 39 hours of classes over 13 weeks).
California recognizes this issue and, in response, has created a 1650 Waiver Packet.  The process allows an out-of-state resident a once in a lifetime waiver of the DUI education program requirement within California.  The effect of obtaining such a one-time exemption is that one can then obtain a license in another state where the person lives because the suspension on one’s license by California will be lifted.
To apply for such a waiver, one should call the Mandatory Action Unit of the DMV in Sacramento at (916) 657-6525.  The DMV will mail the packet to the person at the out-of-state address.  The applicant will have to show proof of living outside California by showing a utility bill in the applicant’s name from a utility company outside California, or some other method acceptable to the California DMV.  There is a small fee with the packet application.  One cannot apply for such a waiver until after the suspension period imposed by the California DMV ends.  This can be as short as four months in a first-time DUI to two years on a second-time DUI.

The 1650 Waiver Packet then takes about four to eight weeks for the California DMV to process.

The applicant will still need to file an SR-22 form with the California DMV.  In other words, the waiver is really to exempt one from the California requirement to attend an in-person DUI program here.