Home
Other Information
Criminal Defense Articles
What If I’m Caught Driving without a Court-Ordered IID?

What If I’m Caught Driving without a Court-Ordered IID?

In every DUI case in Los Angeles County, once a conviction is likely, there is usually a discussion between us and the client about an ignition interlock device, or IID.  The client understands that having an IID installed will permit him or her to continue working, going to school, helping the family and going to DUI classes, although with the risk that the IID will malfunction (as is common) or the client will face embarrassment being seen blowing into the IID to unlock the ignition.

The client asks what an IID is, how it works, which car(s) it must be installed in, how long it must remain installed, how much it costs and then, “what if I am caught driving without it installed (i.e. on a rental car, or a friend’s car)?”  After all, it used to be common for people to disconnect the IID after it was installed to resume drinking and driving.
The answer to this last question of “what happens if I am caught driving without it installed” is that this depends upon the judge.  There is no Vehicle Code or Penal Code section that specifies a minimum or maximum punishment for driving a car without an IID, if so ordered by either the DMV or a judge. 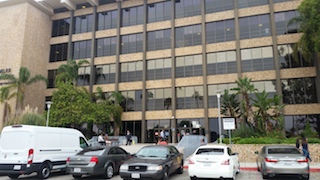 Torrance Courthouse
Rather, it is a condition of probation, either directly addressed by the judge as a condition of probation or indirectly, by the judge ordering that defendant obey all conditions set forth by the Department of Motor Vehicles.  We find that in most cases, the judge does not specify IID requirements.  Most just defer to whatever the DMV orders, usually as a condition of receiving a restricted license, by stating at sentencing “to obey all orders of the DMV.”
However, if a judge offers specific IID requirements, it is because the facts of the case may have involved a second or third-time DUI, a BAC of 0.20% or higher, injuries or maybe evading arrest or resisting arrest.
Usually, when the judge does order this installed, the client has 30 days to show proof of installation of the IID.  This means that after the 30 days expires, one should only drive if a functional IID is installed in the car.
The obligation to keep the IID installed can be for up to three years under Vehicle Code § 23575(a).  This can be extremely expensive, especially because the device must be maintained and recalibrated once every sixty days.
In deciding on a punishment for someone caught driving without an IID when the person is required to drive with such an IID installed and operating, the judge can look to other jurisdictions (other states) for how to punish such a violation.
Some states order a fine of up to $5,000, which in California one could expect may be converted to community service.  Other states mandate a fine of $150 to $600, plus six months in county jail (here in California, one may recall, Paris Hilton was sentenced to three weeks in jail for this violation).  One would be correct to expect jail time on a second offense in most situations, unless perhaps there is an emergency.
Many states also extend the duration of the IID requirement, usually for six months for each violation.  Add to these rather big penalties the fact that the police will surely impound the car, which can be expensive to retrieve from the tow lot.
One thing that a judge cannot do it revoke or suspend the driving privileges of the person (only the DMV can do this) who violates the IID conditions of probation, but surely, a judge may simply order the person into custody to cause the same effect.

For more information about the IID, please click on the following articles:
Contact us.
Serving Torrance, Long Beach, Compton, Airport Courthouses and Other Courthouses.