Our client, who was not a U.S. citizen, in the U.S. on any type of Visa or even a Resident Alien, was stopped for DUI on northbound Western Avenue in Gardena. It was 2:25 a.m. on a Sunday morning.

The officer following our client wrote in his police report that he observed our client weaving within his lane. He only observed him driving over a single block of about 50 yards and our client’s car did not affect the safety of any other motorist, bicyclist or pedestrian (or the officer).

Once the officer illuminated his red and blue overhead flashing lights, our client made an illegal left turn. The illegal turn was most likely committed because the client was looking in his rear view mirror at the officer’s car behind him.

Once the client pulled over, the officer allegedly noticed the strong odor of alcohol (alcohol is actually odorless). Our client also allegedly had an unsteady gait, but this was so because our client only had one leg and an ill-fitting prosthesis on his other limb. The officer, who did not speak Spanish, further claimed our client was slurring his speech, but our client did not speak English at all. He was nervously trying to nevertheless answer the officer’s questions.

These problems, however, seemed to be “cured” when our client validated the officer’s suspicion by blowing a breath sample at the scene that measured 0.21% BAC. The client was then arrested.

The client initially opted to use the public defender at his in–custody arraignment (the client did not bail out at first). The public defender advised him that the District Attorney’s offer was five years of summary probation, the 18 month alcohol awareness program (SB38), a $750 fine plus penalties and assessments (totaling about $3,500), 90 days in county jail, the Hospital and Morgue (HAM) program and the Mothers Against Drunk Drivers (MADD) Victim Impact Panel (VIP). The client was speechless at the severity of the offer. 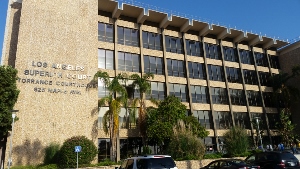 Torrance Superior Courthouse
The client tried to discuss the case with the public defender in Torrance, but she only told him she would address his OR (own recognizance) release at the time. She commented to him that the case was quite serious because his last DUI was just three years earlier and he was facing his third offense for driving on a suspended license. Moreover, his blood alcohol content was almost three times the legal limit.

The client needed someone to challenge the basis for the traffic stop. Greg used his Spanish ability to discuss the case facts with the client. He described U.S. v. Colin (2002) 314 F.3d 439, a federal case that ruled weaving within one’s lane is not a crime unless the weaving is substantial and over a prolonged distance such as 400 meters in Colin. Here it was just over 50 yards.

Greg therefore filed a Motion to Suppress to exclude all evidence, most notably the client’s blood alcohol content. The hearing was quite lengthy because the arresting officer, as is not uncommon, testified to many facts that he never wrote in his police report, but were very significant regarding the traffic stop decision.

For example, while the police report only described our client as “weaving within his lane,” the police officer at the motion hearing described our client as also braking randomly and speeding erratically, all within his fifty yards of observation. The judge seemed to appreciate that the officer’s testimony was quite remarkable, but denied the motion based on his testimony nevertheless.

The District Attorney appreciated how a jury maybe quite skeptical of how convenient the officer recalled so many other significant things when the report did not contain such things. In response, the District Attorney reduced the offer considerably, changing the probation period from five years to four years, the jail from ninety days to twenty days (the client requested private jail to avoid immigration holds), the fine from $750 to $500, plus penalties and assessments (total from $3,500 to $1,900), ten days of Cal-Trans, the MADD VIP and the HAM program.

The client accepted the terms of the plea bargain, knowing he did not want to go to trial in this case.