Our client, age 38, was a Licensed Vocational Nurse (LVN) hoping to become a Registered Nurse (RN) in the near future.  She and her husband, age 40, had no kids and lived in Gardena.  They were both natives of the Philippines.  Neither was a U.S. citizen yet.

In a Nutshell:  Female LVN arrested by Gardena Police Department for domestic violence against her husband, with minor injuries.  She was not a U.S. citizen.  Our office writes letter to Torrance District Attorney’s office, showing our client’s immigration status, LVN license and proof of attendance in an anger management course.  We suggest an office hearing in lieu of a filing.  Case not filed.

One evening in January, they were making dinner and began arguing about household chores.  The argument became physical and our client scratched her husband’s forehead and arm, drawing a very small amount of blood.  The injury shocked both of them and so our client quickly walked away to another part of their condominium to let the situation cool off.
Neighbors had heard the commotion and called the Gardena Police Department to the scene.
Our client was shocked when the police knocked on her door.  It was about 8:00 p.m.  The client’s husband had yet to clean off his forehead cut or the cut to his forearm, so officers quickly focused on our client as the aggressor.  Our client’s husband asked the police to leave and told them that the situation was resolved, but officers were not persuaded.  The took color photographs of our client’s husband and his injuries.  They then arrested our client.
They took her to the Gardena Police Department, where she was booked and bail was set at $20,000 for a violation of Penal Code § 243(e)(1), misdemeanor battery upon a co-habitant, spouse or one with whom one has or has had a dating relationship.  Our client’s husband quickly called a bail bondsman and posted bail to release the client.
The couple called Greg Hill & Associates the following day.  They also spoke to many other attorneys, but retained Greg Hill & Associates.
The couple then met with Greg Hill, who listened to the two describe what had happened just two nights earlier.  Greg had the couple take photographs of the cleaned-up scratches to show how minor the scratches truly were.
Greg also outlined a plan whereby he would write the handling detective for the case at the Gardena Police Department, enclosing a declaration from the husband stating that the injuries he received were partly his wife acting in self-defense and that both sides were to blame, color photographs of the healed injuries, our client’s LVN license, our client’s resume, the resume of our client’s husband and a proof of enrollment in “Our Relationship,” a couple’s counseling class at Torrance Memorial Hospital.
The client also attended and completed an online anger management course through the North American Learning Institute, proof of which was also enclosed in the letter.  The letter suggested that a no-file would fit the conduct at issue. 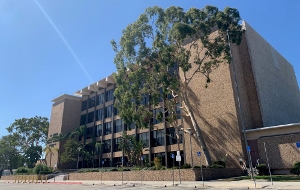 Torrance Superior Courthouse
Greg sent a similar letter to the Torrance District Attorney’s office, enclosing the same materials and suggesting that if a no-file was not possible, that the case be handled through an office hearing wherein a filing decision would be made based on how the parties handled the office hearing.
Greg got no response from the DA’s office or the Gardena Police Department, but on the day before the arraignment, our office called the DA’s office to find out if a case had been filed.  We were advised that no case had been filed.
The next day, Greg nonetheless appeared in the Torrance Court for the arraignment, just in case.  Sure enough, no case had been filed.  Greg thus obtained a Proof of Appearance for the client’s bail bond company and shared the good news with the client, who was very happy to avoid the immigration consequences and licensing discipline that could result from a mere case filing for domestic violence.
For more information about domestic violence, please click on the following articles:
Contact us.
Serving Torrance, Long Beach, Compton, Airport Courthouses and Other Courthouses.