Brief Synopsis: The following summary shows “Sanchez testimony” being excluded from field identification cards that constitute hearsay if the expert did not write the cards or otherwise have personal knowledge of the card’s accuracy.  This caused the appellate court to vacate the criminal street gang sentencing enhancement.

On February 3, 2016, at about 4:30 a.m., City of Ontario Police Officer Devey watched a truck being parked at a motel in Ontario.  Earlier, the same truck had been reported stolen in nearby Chino.  Devey then saw Hector Martinez and Jorge Gonzalez walk away from the truck.
Devey then stopped Gonzalez and found in his pockets a few shaved keys, which can be used to steal cars.  The owner of the truck did not give Martinez or Gonzalez permission to take the truck.  Devey then arrested Gonzalez.
Gonzalez was subsequently charged and convicted in San Bernardino Superior Court of driving or taking a vehicle valued at over $950 without the owner’s consent (Vehicle Code § 10851(a)) and possession of burglary tools (Penal Code § 466).  The jury found the crime was committed in association with a criminal street gang (Penal Code § 186.22(b)(1)(A)).  The jury also found true that Martinez had suffered a prior 10851 conviction and that he had been to state prison on three prior occasions (Penal Code § 667.5(b)).  He was then sentenced to state prison for eight years. 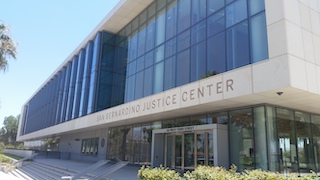 New San Bernardino Courthouse
During trial, Chino Police Officer Chris Chinnis testified as a gang expert.  He stated that the Chino Sinners were a criminal street gang whose primary activity was stealing cars and that they claimed the entire City of Chino as their territory.  He also testified that the Chino Police Department had eight field identification cards for Gonzalez.  In several of the cards, it was stated that Gonzalez was a member of the Chino Sinners.  In one of the cards, it was stated that Gonzalez had “Chino” tattooed on the back of his head and “CSR” tattooed as well, which was thought to stand for Chino Sinners Rifa, or untouchable.  Chinnis, however, also testified that he did not complete any of the field identification cards for Gonzalez.
Chinnis also testified about Gonzalez being heard on wiretapped telephone calls discussing drug activity with members of the Chino Sinners.  A transcript of the wiretapped phone conversation was not admitted into evidence.
Chinnis then opined that Gonzalez was an associate of the Chino Sinners.  On cross-examination, he stated he did not personally know if Gonzalez had any tattoos associated with the Chino Sinners.
Chinnis then opined that the vehicle theft was committed in association with the Chino Sinners due to Gonzalez’s knowledge of the Chino Sinners.
Prior to Chinnis testifying, defense counsel for Gonzalez moved to exclude Chinnis’ testimony concerning Gonzalez’s field identification cards on the basis of hearsay.  The trial court ruled that experts can rely upon hearsay.  Gonzalez’s counsel, however, argued that the content of the field cards constituted testimonial hearsay (they said Gonzalez was a member of the gang) and therefore Chinnis’ testimony regarding the cards’ content would violate Crawford v. Washington (2004) 541 U.S. 36 (Crawford).
After the conviction, Gonzalez appealed the judge’s ruling on the motion to suppress Chinnis’ testimony.  The appeal was filed with the Fourth Appellate District.
The Fourth Appellate District, in People v Hector Martinez (2018 DJDAR 857), reversed the trial court.  In response to Gonzalez’s appeal, the People conceded that the expert’s testimony did rely upon inadmissible hearsay, but that the error was harmless.
The Fourth Appellate District disagreed with the People’s position on this because the hearsay was not independently proven by competent evidence otherwise.  People v. Sanchez (2016) 63 Cal.4th 665, at 668.  The court pointed out that without the hearsay evidence from the field identification cards, there was no proof that Gonzalez was a member of the Chino Sinners.
There was also no evidence tying the crime to the gang.  Moreover, there was nothing showing Gonzalez knew he was in Chino Sinners’ territory or knew that he was committing a crime that Chino Sinners’ members tend to commit.  Therefore, there was no proof that Gonzalez had the specific intent to promote, further or assist in any criminal conduct by gang members, as required under Penal Code § 186.22(b).
The citation for the Fourth Appellate District Court ruling discussed above is People v. Hector Martinez (4th App. Dist., 2018) 19 Cal. App. 5th 853.
For more information about criminal street gang crimes, please click on the following articles:
Contact us.
Serving Torrance, Long Beach, Compton, Airport Courthouses and Other Courthouses.