Our client, age 35, went into a Target in La Habra and proceeded to place a blender priced at $449.99 in her shopping cart.  She then walked around the rest of Target and selected some flash cards for her kids, ages five and nine, to help them learn better English and math.

She then proceeded to the check-out lines, but they were far too long for her to wait and also pick up her kids from school.  In response, she went over to the Starbucks near the exit to get a cup of coffee.  Once there and she got her coffee, she decided to simply walk out the main exit of Target with her shopping cart (without paying for the items).

Summary:  Client arrested for shoplifting a $450 blender at the La Habra Target, as well as some flashcards for her children.  This was her second shoplifting offense.  Case resolved at the Fullerton Courthouse with no jail and just a $150 fine, plus penalties and assessments, and three years of informal probation.

Loss prevention at Target was apparently familiar with this modus operandi and quickly stopped her outside the store before she could get too far.  They escorted her back into the store to the loss prevention office and inventoried her cart full of items.

Loss prevention only noted the $449.99 blender on its list of items recovered, oddly leaving out the flashcards our client had also taken.  They then asked her to waive her Miranda rights and make a statement.  She then waived such rights and stated that she wanted the blender for her house and she realized she made a big mistake. 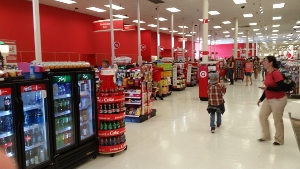 Inside of a Target Store
The store called the La Habra Police Department, who came to the Target and cited and released her on a promise to appear in the Fullerton Superior Court in about two months.  In other words, the police did not take our client to the police department for booking.

The detention by loss prevention meant our client’s children were not picked up from school, so her husband was called, who became alarmed by his wife’s failure to pick up the kids.  He called her cell phone several times, with no success.  When she finally returned home, she explained what had happened.

The husband called Greg Hill & Associates the following day and scheduled a meeting with Greg that afternoon.

The husband, the wife (the client) and Greg met and discussed the facts of the case.  The wife surprised her husband by disclosing to Greg that ten years earlier, before the two were married, she had been convicted for shoplifting in a similar factual scenario.

The client and her husband left the office after retaining Greg.  She immediately completed an online shoplifting course and gave Greg the proof of completion to take to court with him.  She later provided a resume and a hand-written statement about why shoplifting is illegal.

Greg then appeared in the Fullerton Superior Court about eight weeks later.  The initial offer from the prosecutor involved sixty days of county jail, but after Greg explained the client’s family obligations to two young children and showed the prosecutor the completion certificate from the online shoplifting class, as well as the client’s resume and handwritten essay, the prosecutor changed the offer to simply three years of summary probation and a $150 fine, plus penalties and assessments (as well as providing a DNA sample).

The client was extremely relieved to avoid county jail and happy that she had followed Greg’s advice about taking the online shoplifting prevention course.  The case then did resolve with just the $150 fine (plus penalties and assessments, meaning a total of about $730), a DNA sample and three years of summary probation.  The client’s husband was perhaps even more happy than his wife, as he was overwhelmed with the thought of having to miss work to attend to the two children while his wife was in jail.