It was 2:00 a.m. and our client, age 25, somehow had become separated from his friends in downtown Fullerton.  The group of four had been in one bar and then left together, walking together down Commonwealth Avenue.  They each were drunk, which they intending on accomplishing and then planned on taking an Uber together back home to Rancho Cucamonga.
Our client did not want to take an Uber alone back to Rancho Cucamonga due to the expense, so he nervously paced the streets, looking for his friends.  He was worried they had already left or might leave without him, assuming he had met a date or had gone back alone.  The was calling them on their cell phones, texting them, too, but no one was responding.

The Gist of This Summary:  Client receives ticket for urinating in public in downtown Fullerton.  Our office contacts the Fullerton Police Department and the Fullerton City Attorney’s office, explaining the client’s conduct and enclosing his resume and pay stub.  No case is filed.

It was a warm summer night.  Suddenly, our client realized he needed to urinate.  However, he did not want to go into a bar, fight his way back to a restroom, which probably had a line, and wait for ten minutes and miss his friends.  He consequently decided to urinate outside so he could keep searching for his friends more easily. 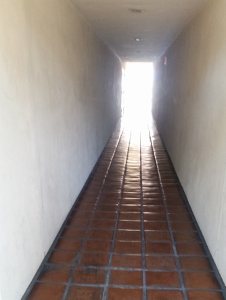 Alley in Fullerton
Just where he urinated was unclear even to our client, as he was so drunk he could not recall.
A uniformed police officer quickly spotted our client and issued him a ticket with a misdemeanor marked as the violation level.
This ticket created more anxiety for our client than losing contact with his friends.  Our client had worked hard in life, earning a bachelor’s degree in mechanical engineering from a Cal State university.  He had no prior convictions or even a parking ticket.  He had a solid job with an HVAC (heating, ventilation and air conditioning) company in Irvine and was fearful a misdemeanor would mean the end of his employment.
He contacted Greg Hill & Associates and discussed the case with Greg Hill.  He described what had happened and how he thought any conviction would mean he’d be fired.  This would not be a good start to his career.  Greg explained how such cases are handled at the Fullerton Court house and how, often the case can be dismissed pursuant to a civil compromise (under California Penal Code §§ 1377 and 1378) if the client makes a $300 donation to the Fullerton Victim Restitution Fund.
Greg encouraged the client, however, to send him a copy of his paystub (blacked out as to his social security number and pay amount) and his diploma.  Greg said he would prepare a letter to the Fullerton Police Department and to the Fullerton City Attorney, enclosing the diploma and pay stub to show our client was a high achiever and that the ticket was much more a lapse of judgment, rather than criminal conduct (although no intent is specified as required under the law for this offense).  Greg would also explain, not as an excuse, but by way of mitigation, that our client had lost his friends that evening and did not want to enter a bar to use the restroom and miss his friends.
The client did then send Greg a color copy of his diploma and his most recent paystub, which Greg redacted to blacken over the client’s social security number and payment amount.  Greg then prepared a short letter to the Fullerton Police Department and the Fullerton City Attorney, enclosing the client’s diploma and his pay stub, asking that each recipient consider the client’s conduct as nothing more than a lapse in judgment and that the case not be filed.
Neither the Fullerton City Attorney nor the Fullerton Police Department responded to the letters, but when Greg appeared for the arraignment about a month later, no case was filed against the client.
Greg shared this news with the client, who was overjoyed.  It should be noted that our office cannot say with any degree of certainty that our letters made any difference in the decision not to file the case.  The decision could have been made on entirely separate grounds.