Our client, age 22, was an E-1 (seaman recruit) in the U.S. Navy.  He had just finished basic training in San Diego and was on his first weekend away from the base in many weeks.

He was from La Mirada, so he went home and out to downtown Fullerton for the evening with friends.  The group of three listened to our client tell his stories about basic training and what he learned.  The training was a good excuse to have a beer or two and he did with his friends.

The Gist of This Article:  Public urination case in Fullerton against our client, a seaman recruit (E-1) who had just finished boot camp in the U.S. Navy, dismissed without our client having to make any donation or otherwise “earn” a dismissal.

As the group was leaving the bar right before closing, they stepped out onto the sidewalk to walk back to their car.  Suddenly, our client realized he needed to use the restroom (or in his Navy lingo he had just learned, the “head”).  He went back to the bar and asked to be let in to use the restroom, but the bouncers said no. 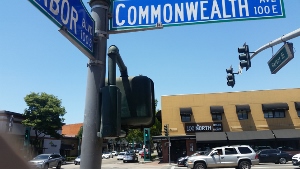 Downtown Fullerton
Our client had to go.  He could not hold it in much longer, so when he and his friends walked past an alley, our client advised them that he would be ducking into the alley behind a dumpster to relieve himself.  Our client’s two friends kept walking in the general direction of their car, but a bit slower to allow our client to catch up once he finished urinating.

Our client expected to urinate quickly and then rejoin his friends, but his is not what happened.  After he finished, he zipped up his pants and turned around, only to find himself face to face with a uniformed Fullerton police officer about five feet away.  As our client told us, “it was like he crept up on me.  Kind of weird.”

The officer asked our client if he knew urinating in public was a crime and our client replied that he did not know this.  The officer then told him it was and asked for our client’s identification.  Our client produced his military ID and his driver’s license.

The police officer looked at the military ID and handed it back, but kept the driver’s license to fill out the ticket for our client.  He then handed the ticket to our client and asked him to sign the bottom, which was a promise to appear in the Fullerton Superior Court about two months later.

At the time, the client believed he had just received a ticket to pay a fine.  However, after he returned to base in San Diego and looked closer at the ticket, he realized he had been cited and released for a misdemeanor.  He got on the Internet and realized that the ticket was more serious than he originally believed.

He then called Greg Hill & Associates.  Greg, a U.S. Naval Academy graduate, enjoyed speaking with the client about the Navy and what basic training included for the client.  The client appreciated the instant rapport he had with Greg and the experience Greg had in resolving such cases in the Fullerton Courthouse.

Greg requested that the client send him his ticket, as well as his most recent pay statement so that Greg could show the Fullerton City Prosecutor that the client was an active duty U.S. serviceman.

Greg then appeared at the arraignment and discussed the facts of the case with the Fullerton City Prosecutor.  Greg explained that the client was not observed by the police officer because he was obscured behind a dumpster.  Greg also showed the prosecutor the client’s most recent pay statement, which the prosecutor looked over.

The Fullerton judge assigned to the case then called the matter and the prosecutor stated on the record that the prosecutor had decided to dismiss the case.

The client was overjoyed at this news, as he feared that being on probation would prevent him from deploying and having any conviction at all would mark him as a man with poor judgment and undeserving of any promotion.