Our client and his family came from San Jose to Anaheim to visit Disneyland with their two young children.  While at the park, our client ran into some old friends and in the excitement of the moment, agreed to meet them later that evening, without his family once the kids went to sleep.

Once the family returned to their hotel room, our client’s wife was very upset at her husband and told him so.  She nagged at him about his duty to his family and he responded, throwing a half-filled plastic soda bottle at her from 30 feet across the room.  He just meant to throw it in her general direction out of anger that she was really trying to ruin his time with his old friends, leaving her alone in a hotel room with two sleeping children.

When the client called us, he had a warrant for his arrest because he failed to appear at the arraignment.   He had returned to San Jose, thinking that if he did not appear in court, the case would be dismissed.

The client was quite worried about the bench warrant, as it was his employer that notified him.  Apparently, it did a periodic background check on all employees and discovered the warrant.  Greg then spoke with the client and discussed the case facts, as well as his experience with the Anaheim City Attorney’s office operating out of the Fullerton Courthouse.

We then appeared with the client, as the client must appear in any domestic violence case at the arraignment.

Lucky for our client, the photographs of the injury showed no injury, but the wife’s hysteria on the 911 call caused the Anaheim City Attorney to be quite upset at our client.  She also exaggerated the nature of the throw, as we later found out from her.

The wife never imagined that her husband might face jail time or fines or have to attend 52 batterer’s classes.  She was just angry at her husband and called 911 out of frustration.  She admitted that the bottle did not hurt her at all. 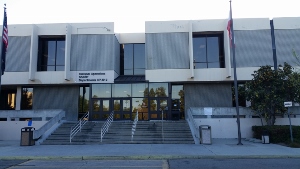 Fullerton Superior Courthouse
Over several court appearances, Greg Hill was able to bring the City Attorney to a better understanding the case and the minor nature of the incident.  Greg convinced the City Attorney that jurors may find the client’s throw was not meant to actually hit his wife as much as it was just a gesture of frustration that coincidentally hit his wife.  In other words, he lacked the specific intent required to injure his wife.

Accordingly, the City Attorney graciously agreed to amend the complaint to allow our client to plead to disturbing the peace (Penal Code § 415(1)) and he dismissed the domestic violence charge (Penal Code § 273.5).

The client still had to complete the 52 session batterer’s program and perform 10 days of community service, as well as make a $500 contribution to a battered women’s shelter and pay a $150 court fine.  However, he was tremendously relieved to avoid the scar of having a conviction for domestic violence on his record, which he stated would have caused his boss to fire him.

For more information about the issues described in this summary, click on the following articles:
Watch our Video about Domestic Violence by clicking here.