While there are over seventy-five new criminal laws that come into effect in 2019, we have distilled down the list to fourteen that we think our readers would find most likely to impact them or that make certain conduct a crime that earlier was not.  These laws are:
1.    It is now a misdemeanor to intentionally and fraudulently impersonate a member of a search and rescue team.  This (AB 1920) is added as Penal Code § 538h.  This must be a response to looting that took place after the recent wild fires all across California.

2.    AB 2103 requires that the training for applicants to carry a concealed firearm (CCW) shall be no less than eight hours in length and specifies safe handling and shooting proficiency requirements.  This amends Penal Code § 26165.

3.    Section 1202.4 of the Penal Code is expanded to authorize a judge to order victim restitution to cover the costs of installing residential security systems in domestic violence cases.

4.    Evidence Code § 1162 is added to prohibit the admission of evidence that a victim of, or witness to extortion, stalking or a violent crime was engaged in an act of prostitution at or around the time he or she was the victim or witness in order to prove liability in a separate prosecution for the act of prostitution.  This encourages prostitutes to come forward to report violent pimps and prevent human trafficking. 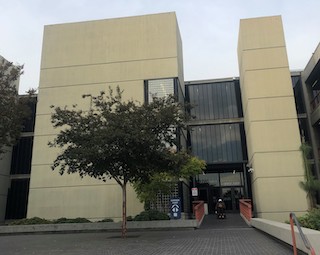 Bellflower Courthouse
5.    Penal Code § 688.5 is added to make it unlawful for a local city or county government to charge a person for the costs of investigation, prosecution or appeal that the city or county sustains in a criminal case.

6.    Section 1209.5, relating to infractions, requires a judge to permit a person convicted of an infraction to perform community service in lieu of paying a fine upon demonstrated financial hardship, and sets an hourly rate for community service;

7.    Provides that an inmate in state prison who has maintained an inmate trust account with $25 or less for 30 consecutive days be deemed indigent and receive basic supplies necessary for maintaining personal hygiene (adds section 5007.7 to the Penal Code);

8.    Penal Code § 2644 prohibits male correctional officers from conducting pat-down searches on female inmates and from entering areas of the institution where female inmates may be in a state of undress;

9.    Penal Code § 463 is amended to make looting include theft that occurs while in an area under an evacuation order;

11.    Penal Code § 859.7 is added to require all law enforcement agencies and prosecutorial entities to adopt regulations for conducting photo lineups and live lineups with eyewitnesses;

13.    Penal Code § 3003 of the Penal Code is amended to provide that an inmate being released from custody or parole on post-release community supervision (PRCS) who was committed to prison for a sex offense for which registration is required, shall through all efforts reasonably possible be returned to the city that was the last legal residence of the inmate prior to incarceration, or a close geographic location in which he or she has family, social ties or economic ties and access to reentry services, unless return to that location who violate any other law or pose a risk to his or her victim.

14.    Penal Code § 4577 is added to make a person who knowingly and intentionally operates an unmanned aircraft system, i.e. a drone, on or above the grounds of a state prison or jail, guilty of an infraction punishable by a fine of $500.
For more information about new criminal laws, please click on the following articles:
Contact us.
Serving Torrance, Long Beach, Compton, Airport Courthouses and Other Courthouses.