Effective January 1, 2019, prosecutors in California can prosecute a new crime, organized retail theft, under Penal Code § 490.4.  It is one of the first laws to specifically recognize and seek to penalize online theft.  It only will remain a law until January 1, 2021, so for two years (2019, 2020), although we suspect it may become a permanent law thereafter.

The Reader’s Digest Version:  Organized retail theft (defined at Penal Code § 490.4) is a crime distinguishable from shoplifting, petty theft, grand theft and commercial burglary.  A group of people will enter a store to create a distraction to storeowners / loss prevention.  They then steal product, often in large amounts, and sell it online.  The crime is a wobbler.

The new law seems to recognize and seek to punish those who are rather sophisticated shoplifters, even “online /cyber-shoplifters,” if such a term can be used to describe those who work with others in a planned and premeditated manner to steal from retailers or merchants, often on a large scale, often over the Internet.
In a sense, they are professional shoplifters, often working in groups as an organized crime ring focusing on retail establishments as targets.  For example, several people may enter a store with specified roles: one may create a distraction for loss prevention while one or more others then shoplift specified items, which are later resold, often online or at swap meets.
This type of crime is not new.  In Florida in 2008, police discovered an organized shoplifting operation that had operated for at least five years and had stolen up to $100 million in health products, medicine (often altering the expiration dates, putting consumers in danger of consuming expired medicine) and beauty products.  In January 2013, West York Police (York County) in Pennsylvania arrested over 130 people involved in a retail crime ring that targeted over 90 stores in 300 places in five Pennsylvania counties and two counties in northern Maryland, with an estimated loss to retailers of approximately $1 million. 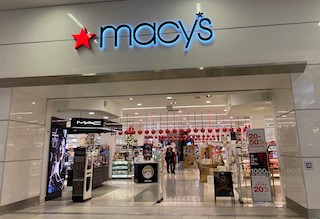 Macy's
California has been criticized as being one of only seventeen states that do not have such a law to address online shoplifting, according to the Loss Prevention Manager website.  This website characterizes California as a “shoplifter’s paradise.”
Another lawmaker said this new law was needed, especially its provisions of making certain types of shoplifting a felony, because Prop 47 made all shoplifting a misdemeanor in all instances, as long as an individual stole less than $950, even if the suspect had committed the crime five times in the past.
According to the Los Angeles Times, this created a bit of a loophole that needed to be closed.  The paper continued, saying “[t]hat threshold, some retailers have said, allows members of organized crime rings to steal from multiple stores, or from the same store numerous times a day, without facing tougher punishment.”
This new California law arose from Assembly Bill (AB) 1065, originally brought by Assemblyman Reggie Jones-Sawyer (Democrat, Los Angeles).  It targets anyone who acts with one or more others “to steal merchandise from one or more merchant’s premises or online marketplace with the intent to sell, exchange, or return the merchandise for value.”
It also allows prosecution of a person who acts in concert with two or more persons to receive, purchase or possess such stolen property, knowing or believing it to be stolen.  It further prosecutes anyone who acts as an agent of others or recruits other to steal such merchandise from an online marketplace or merchant’s premises.
As alluded to above, the law is a wobbler.  This means it can be prosecuted as a felony or a misdemeanor.   Punishment varies from up to one year in county jail and or a fine of up to $1,000, plus penalties and assessments that can boost the total owed to the court to about $4,500, to up to four years in state prison.
Section 490.4(a)(2) specifies that the case will be prosecuted as a felony if an individual commits two or more separate violation of this law (online thefts, thefts from a retail establishment, receiving such property or purchasing such stolen property) within twelve months and the value of the items stolen exceeds $950.  It is unclear if this is the only criteria under which a felony can be alleged under this new law.
The case can be filed in the county where the online theft originated, where the retail property was received or recovered, or where defendant or defendants acted in concert with others.
For more information about issues, please click on the following articles:
Contact us.
Serving Torrance, Long Beach, Compton, Airport Courthouses and Other Courthouses.