Home
Other Information
Criminal Defense Articles
Fish and Game Violation? It May Become a Federal Case!

Fish and Game Violation? It May Become a Federal Case!

Synopsis: Fisherman off the coast of Florida indicted on federal charges of destroying evidence (fish) under a white collar crime statute used to prosecute Enron’s accounting firm and takes case to U.S. Supreme Court, which finds such prosecution improper and remands case to the 11th Circuit federal district court.

John C. Yates was captain of the Miss Katie, a commercial fishing boat out of Cortez, Florida, a port on the Gulf of Mexico.

On August 23, 2007, the Miss Katie was six days into a fishing expedition with three crew members, including Yates.  Officer John Jones of the Florida Fish and Wildlife Conservation Commission, boarded the Miss Katie on a routine offshore patrol to inspect commercial vessels.

Although the Miss Katie was far enough from the Florida coast to be in exclusively federal waters, she was nevertheless within Officer Jones’ jurisdiction because Jones had been deputized as a federal agent to also enforce federal fishing laws.

When Jones boarded the boat, he noticed three red grouper that appeared to be less than twenty inches long, a violation of  50 CFR § 622.37(d)(2)(ii).  Violation of the regulation is a civil offense punished by a fine or a fishing license suspension. 16 U.S.C. § 1857(1)(A),(G).  It merits mention that there were thousands of other fish on the boat, but Jones saw just three that were shorter than twenty inches. 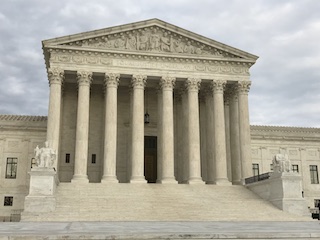 U.S. Supreme Court
Jones instructed Yates to separate the undersized fish until he reached port.  Jones then inspected the rest of the ship’s catch, as he suspected there might be more undersized fish.  There were indeed, as Jones identified 69 more such red grouper than were under twenty inches long.
Jones used a catch verification form to measure each of the fish.  Three of the 72 fish were less than nineteen inches.  None were less than 18.75 inches.  Jones then instructed Yates to put the illegally small fish in a separate crate.  Jones then issued Yates a citation for possession of undersized fish and left.

Four days later, after the Miss Katie reached port in Cortez, Florida, Jones again measured the fish.  Somehow, the fish had gotten longer, although they were still all less than twenty inches.  Jones asked one of the Miss Katie crew members if he knew anything about this and the crew member said that Yates had told him to throw the undersized fish overboard and then they prelaced the 72 fish with bigger fish.

For some reason, 32 months passed with no criminal charges being filed.  Finally, on May 2, 2010, Yates was indicted in federal court on charges of destroying property to prevent a federal seizure, a violation of 18 U.S.C. § 1519.  This section is a provision of the Sarbanes-Oxley Act was designed to protect financial investors and restore confidence in our financial markets following the collapse of the Enron Corporation.  It had never been used in any other context, let alone for catching undersize fish and throwing them back in the ocean.

Yates proceeded to trial and, at the end of the government’s case in chief, he moved for acquittal.  He argued that § 1519 involves destruction of documents or hard drives used to store information, not fish.  The court denied this and Yates was convicted and sentenced to 30 days in jail.

Yates appealed to the U.S. Supreme Court.  The U.S. Supreme Court began its analysis by noting that the Sarbanes – Oxley Act was passed in response specifically to Enron’s massive accounting fraud and revelation that its outside auditor, Arthur Anderson, had systematically destroyed potentially incriminating documents and hard drives.  It also noted that the government in Yates’ case could have pursued him with other criminal code sections that were used for fishing-related offenses.

The U.S. Supreme Court also noted that § 1519 first applied to threatening another person into destroying documents, but this did not happen in Yates’ situation.  The Senate Report on the legislative history, furthermore, described this law as “an anti-shredding provision.”

The U.S. Supreme Court then launched into an exhaustive analysis of statutory construction in general and, later, in more detail as to the Sarbanes – Oxley Act in particular.  It rejected the government’s “unrestrained reading” of the act to include any kind of evidence to include fish.  It therefore reversed the ruling and sent the case back to the Eleventh Circuit for further proceedings.

We hope such proceedings include dismissal.  Indeed, such bizarre charges cannot be encouraged by our courts.  This type of prosecutorial aggression blurs the lines limiting a statute to its original statutory intent.  We therefore applaud the Supreme Court in agreeing that there was something a little too fishy about this case.
The citation for the U. S. Supreme Court ruling discussed above is John C. Yates v. United States (2015) 574 U.S. 528, 135 S. Ct. 1074, 191 L.Ed. 2d 64.
For more information about the issues in this case, click on the following articles:
Contact us.