Between 1987 and 1996, the bodies of eight women were found in the “Figueroa Corridor” of Los Angeles, an area known for prostitution and drug activity.  All of the victims had been sexually assaulted, and strangled to death, sometimes by ropes, a belt or an electrical cord and sometimes manually.  All had a history of drug abuse, and all but one had cocaine in their systems.  Some were homeless, some were thought to be mentally ill, and some had arrests for prostitution.

In a Nutshell: Expert testimony can be regarded as inadmissible hearsay if it relies upon measurements and conclusions of another person, as here one expert introduced testimony about the weight and condition of a fetus she never examined, but recited the report of another doctor which could have been inaccurate.

Defendant Chester Dewayne Turner lived at various addresses in the Figueroa Corridor during this time.  Police identified him as a suspect in 2003 when his DNA was found to match DNA left on the victims in several unsolved cases.
He was later convicted of murdering ten women and one viable fetus and was sentenced to death by Judge William Pounders in the downtown Los Angeles Clara Shortridge Foltz courthouse.
Trial was notable because during trial, he was placed on lockdown at one point within the Los Angeles County Jail, as is common and can be due to many factors, usually because of a disturbance or scuffle in some area of the jail.  During one of the lockdowns, Mr. Turner told another inmate that he would kill the one female deputy assigned to his area because he thought she personally decided to impose the lockdown.  The other inmate believed Turner “because he hated women.” 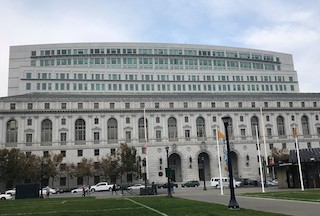 CA Supreme Court San Francisco
After being sentenced to death, he enjoyed an automatic appeal, which primarily challenged the admission of statistical evidence about DNA matches and hearsay testimony about the baby’s viability.  The appeal made its way up to the California Supreme Court in People v. Chester Dewayne Turner (2020 DJDAR 12726).
This article will only consider the appellate argument which the California Supreme Court found meritorious, that the trial court judge erred by allowing Dr. Lisa Scheinin, a deputy medical examiner, testify that she thought the fetus carried by Regina Washington, one of Turner’s victims, was viable when Turner choked Washington to death, also killing the fetus.
Although Dr. Scheinin had not autopsied the fetus herself, she related findings from an autopsy report that the fetus was female, weighed 825 grams and had a gestational age of 27 to 28 weeks, or approximately six and a half months.  Dr. Scheinin explained on the stand to the jury that World Health Organization guidelines consider a fetus viable after it has reached the 22nd week or a weight of 500 grams.
Although the autopsy report said nothing specific about whether the fetus could have survived outside the womb, Dr. Scheinn concluded from the numbers in the report (which might have been inaccurate due to negligence of the doctor who performed the autopsy) that the fetus was “clearly well into the ranges that’s defined as viable.”  The fetus had no congenital abnormalities and there was nothing to suggest the mother’s cocaine use had negatively affected its health or development.  She testified that the fetus appeared to be a “normally developing healthy baby.”
The legal relevancy of this testimony was two-fold.
First, under California law and U.S. Supreme Court law, this testimony suggested Turner had committed murder.  In 1970, the California Legislature amended Penal Code § 187(a) (murder) to include the killing of a fetus.  Thereafter, in 1973, the U.S. Supreme Court decided in the abortion context that states have no legitimate interest in protecting a fetus before it reaches viability, which the court defined as the “capability of meaningful life outside the mother’s womb.” Roe v. Wade (1973) 410 U.S. 113, 163.  Thereafter, a series of California Court of Appeals decisions relying on Roe held that only the killing of a viable fetus could constitute murder.  See People v. Smith (1976) 59 Cal.App.3d 751, 757.
Courts have defined viability for this purpose as “having attained such form and development of organs as to be normally capable of living outside the uterus.”  Smith, supra, at 758.
Defendant herein alleged Dr. Scheinin violated state law by relating case-specific hearsay from the fetus’ autopsy report to support her viability opinion.  See People v. Sanchez (2016) 63 Cal.4th 665 (a case involving a gang expert testifying as to field identification (F.I.) cards prepared by another officer concerning defendant).  Defendant Turner also argued that the report’s statements were testimonial and admitted in violation of his Sixth Amendment right to confront his accusers.  See Crawford v. Washington (2004) 541 U.S. 36.
The California Supreme Court agreed, noting she did not perform the autopsy and yet offered offered testimony concerning the weight of the fetus and gestational age of the fetus.
The Supreme Court therefore reversed the conviction for fetal murder, but did not reverse the death penalty for Mr. Turner.
The citation for the California Supreme Court ruling discussed above is People v. Chester Dewayne Turner (2020) 10 Cal. 5th 786, 272 Cal. Rptr. 3d 50, 476 P. 3d 676.
For more information about murder and hearsay, please click on the following articles:
Contact us.
Serving Torrance, Long Beach, Compton, Airport Courthouses and Other Courthouses.