Summary in 40 Words or Less:  Parents can be convicted of second-degree murder for the death of their daughter due to Type 1 diabetes when there is a finding of conscious disregard for her condition and indifference to her condition.

Not only did the jury convict both Lathams of violating Penal Code § 187(a) (Second-Degree Murder), but the jury also convicted each of child endangerment (Penal Code § 273a(a)).
Gregory also pled guilty to using a minor to transport or sell methamphetamine (Health and Safety Code § 11353). 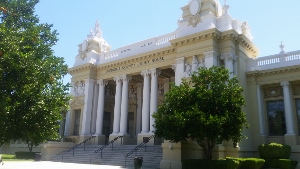 Riverside Historic Courthouse
In 2001, the Latham’s twelve-year old daughter, Nanette, was diagnosed with Type 1 diabetes and the parents were instructed on how to recognize the condition’s symptoms.  At the time, Nanette displayed fruity breath, a sign of acetone in the breath, and Kussmaul breathing, which is deep, heavy breathing.

In 2006 at age 17, Nanette’s condition deteriorated to the point where she again displayed fruity breath and Kussmaul breathing.  Neighbors urged the Lathams to obtain medical treatment for their daughter.  They ignored their neighbors and Nanette died.

On appeal, the Lathams argued that there was insufficient evidence to support a finding of second-degree murder.  More fundamentally, a state court conviction that is not supported by sufficient evidence violates the due process clause of the Fourteenth Amendment and is invalid for that reason.

In reviewing the appeal, in People v. Gregory Lee Latham, et al. (2012 DJDAR 1647), the Fourth District Court of Appeal noted that there was ample evidence in the record from trial that Nanette’s medical condition prior to her death was grave.  Evidence was introduced that she became immobile, breathed heavy and complained of pain in her lungs and ribs.  The court of appeals noted that many neighbors testified how bad Nanette looked in the week prior to her death.  For example, one neighbor said she was barely able to stand up or walk.  Another neighbor said she looked seventy years old, judging by the look of her skin and her eyes, even though she was seventeen.

The appellate court acknowledged evidence in the record that suggested in the final days that Gregory Latham attempted to treat Nanette’s condition, including providing her with fluids, insulin and food and monitoring her blood sugar.  Mr. Latham also testified that he believed her condition was improving.

However, the court of appeals found, the parents knew quite well that the condition was life-threatening (from two prior near-death episodes in the emergency room with their daughter), yet they failed to take her to the hospital until she appeared to stop breathing at their home.  Even then, they drove her to the hospital in their own car, rather than use an ambulance.

The facts of this case are extremely sad, but we post this summary to exemplify how a crime can be found by a failure to act.  The apparent indifference and callous disregard that the jury found was enough to be a crime.  In today’s world, having a sick family member, especially a child, can be extremely difficult to handle.  Getting outside help can be critical.  We do not know if the neighbors disliked the Lathams for some other type of incident, but it appears they were cooperative with prosecutors in helping convict the parents.

For more information about murder, click on the following articles:
For case summaries of selected violent cases our firm has handled, click here.