Jason Lee was convicted under 21 U.S.C. § 847 of distributing crack cocaine. Judge Vaughn Walker of the U.S. District Court in downtown Los Angeles sentenced Lee as a career offender under the U.S. Sentencing Guidelines Manual, section 4 B1.1.

Judge Walker so sentenced Lee because he found that Lee’s two prior state courts convictions under California Health and Safety Code § 11352(a) qualified as controlled substance offenses. Such a finding had the consequence of requiring a sentence for Lee of 262 to 327 months in federal prison.

In a Nutshell: In comparing federal and state statutes for purposes of finding a state court conviction a qualifying offense, it is prudent to evaluate the scope of each statute to be certain the prohibited conduct in the state court offense is not broader than the conduct covered by the federal offense, as the case summary below exemplifies.

Lee appealed the sentence, arguing, that the district court judge made an error in classifying him as a career offender because his two prior 11352 convictions were not “controlled substance offenses” as defined by federal law. 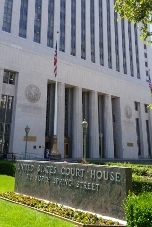 U.S. District Court Los Angeles
The U.S. Sentencing Guidelines Manual § 4 B1.1 states that a defendant is a career offender if:

The Court of Appeals reasoned that under the “categorical approach,” it could only look to the statute of conviction. In evaluating this, the court’s job was to “compare the elements of the statutory crime of conviction with the federal definition of the crime to determine whether conduct proscribed by the statue is broader than generic federal definition.” United States v. Gonzalez-Aparicio (9th Cir., 2011) 663 F. 3d 419, 425.

Here, the prior convictions were in 1998. At that time Health and Safety Code § 11352(a) provided that “every person who transports, imports into this state, sells, furnishes, administers, or gives away, or offers to transport, import into this state, sell, furnish, administer, or give away, or attempts to import into this state [certain substances specified in the California uniform controlled substances act] shall be punished by imprisonment in the state prison for three, four or five years.” California Health and Safety Code §11352(a) (1998).

While such an approach is indeed extremely academic after all, Lee could have been pleading to transportation of a controlled substance by pleading to 11352 each of two times. Therefore, the Ninth Circuit Court of Appeals found such issues material enough to order Lee’s sentence vacated and remanded the case back to Judge Walker for further sentencing.

For more information about sentencing issues in federal court, click on the following articles: