The interpretation of a state court conviction for purposes of enhanced sentencing in federal court under the federal Armed Career Criminal Act (ACCA), 18 U.S.C. § 924, can often be confusing and even counterintuitive.

In a Nutshell:  Under the Armed Career Criminal Act (ACCA) of 1984, the definition of a serious drug offense requires only that the state offense include conduct specified in the ACCA.  It does not require that state courts develop “generic” versions of a drug crime with elements of a crime.

The following summary traces the U.S. Supreme Court’s recent decision (February 26, 2020) in Eddie Lee Shular v. United States (2020 DJDAR 1553) wherein Mr. Shular pleaded guilty to possessing a firearm after having been convicted of a felony, in violation of 18 U.S.C. § 922(g)(1), and possessing a controlled substance (cocaine) with intent to distribute in violation of 21 U.S.C. §§ 841(a)(1) and 841(b)(1)(C).  The U.S. District Court for the Eleventh Circuit sentenced Shular to 15 years in federal prison, the mandatory minimum under the ACCA, to be followed by three years of supervised release.
As the reader of this summary may know, ordinarily, a defendant convicted of being a felon in possession of a firearm, in violation of § 922(g)(1), faces a maximum sentence of ten years in federal prison. § 924(a)(2).
It should be noted that the ruling of the U.S. Supreme Court, while a review of an Eleventh Circuit court decision (not a Ninth Circuit decision, which would cover California), is controlling over the Ninth Circuit, so it is controlling law for California convictions that may be interpreted by federal courts in sentencing.
In imposing the sentence, the U.S. District Court took account of Shular’s prior convictions under Florida law.  In 2012, Shular pleaded guilty to five counts of selling cocaine and one count of possessing cocaine with intent to sell, each in violation of Florida Statute § 893.13(1)(a).  The District Court concluded these six convictions qualified as “serious drug offenses” triggering the ACCA enhancement of fifteen years.  The Eleventh Circuit affirmed the sentence. 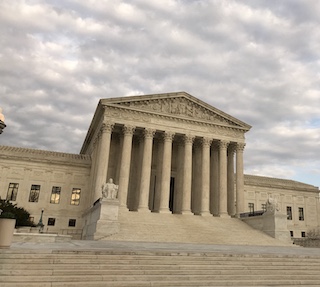 Photo of U.S. Supreme Court
That law makes it a crime to “sell, manufacture, or deliver, or possess with intent to sell, manufacture, or deliver, a controlled substance.”
Knowledge of the illicit nature of a controlled substance is not an element, but lack of such knowledge is an affirmative defense.  § 893.101(2).
In affirming the sentence, the Eleventh Circuit took a “categorical approach,” under which it only looked to the “statutory definitions of the prior offenses.”  Taylor v. United States (1990) 495 U.S. 575, 600.  Under this approach, the court does not consider the particular facts of the underlying prior convictions nor the “label a State assigns to the crime.”  Mathis v. United States (2016) 579 U.S. _____.
For example, to apply ACCA’s provision defining “violent felony” to include burglary,” § 924(e)(2)(B)(ii), “we ask only whether the elements of the prior conviction constitute burglary; we do not ask what the person did or whether the offense of conviction was named ‘burglary.’”  This is the categorical approach.
Shular appealed the sentence to the U.S. Supreme Court.  He argued that when enacting the ACCA, Congress meant to capture the drug offenses generically existing in state laws at the time.  He argued that Congressional intent was to punish the underlying conduct involved, not by the name of the offenses.  He argued this would be fair because otherwise, defendants would be subject to sentencing enhancements for conduct that would not be illegal in all states.  In particular, since Florida did not require knowledge as an element for a conviction, it was unfair to apply the enhancement to him.
The U.S. Supreme Court rejected this argument.  It acknowledged that the ACCA mandates a 15-year minimum sentence for a convicted felon in possession of a firearm when that felon has at least three prior “serious drug offenses.”  18 U.S.C. § 924(e)(1).
A state offense qualifies as a “serious drug offense” only if it “involves manufacturing, distributing, or possessing with intent to manufacture or distribute, a controlled substance.” § 924(e)(2)(A)(ii).  There was no knowledge element required to be proven that defendant knew the substance was illegal; only the intent to manufacture or distribute it (even if he thought it was legal).
Consequently, the U.S. Supreme Court affirmed Shular’s sentence.
We present this summary to show the methodology by which a federal court evaluates whether predicate or underlying offenses qualify under the ACCA.  It can be rather surprising, as Shular found out here.
The citation for the U. S. Supreme Court ruling discussed above is Eddie Lee Shular v. United States (2020) 589 U. S. ___, 140 S. Ct. 779.
For more information about federal sentencing issues, please click on the following articles:
Contact us.
Serving Torrance, Long Beach, Compton, Airport Courthouses and Other Courthouses.