The federal Armed Career Criminal Act (ACCA) increases the sentence of those federal defendants who have three prior convictions “for a violent felony or a drug offense” which includes “burglary, arson or extortion.”

Overview:  Prior burglary conviction not a predicate offense to enhance defendant’s federal sentence for felon in possession of firearm.

To determine whether a past conviction is a “violent felony,” courts use a “categorical approach.”  In the case of Michael Deschamps, he was convicted of being a felon in possession of a firearm in violation of 18 U.S.C. § 922(g).  Without any enhancements, the offense carries a maximum sentence of ten years.  Deschamps had prior convictions for robbery, felony harassment and burglary under California Penal Code § 459 (“Commercial Burglary”).

The prosecution sought to enhance Deschamps’ sentence, arguing that Deschamps’ prior conviction for violating Penal Code § 459 qualified as a violent felony.  If the court were to agree with the prosecution, Deschamps would be sentenced to a minimum of fifteen years. 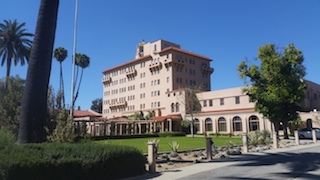 U.S. Ninth Circuit Court of Appeals Pasadena
The ACCA defines a “violent felony” as “any felony, whether state or federal, that has as an element the use, attempted use, or threatened use of physical force against the person of another, or that is burglary, arson or extortion, involves the use of explosives, or otherwise involves conduct that presents a serious potential risk of physical injury to another.”  18 U.S.C. § 922 (e)(2)(B).
Deschamps argued that his conviction for violating Penal Code § 459 could not count as a predicate offense to satisfy the ACCA.  He argued that California’s § 459 statute does not require the entry to be by force or by breaking and entering as most states’ burglary statutes require.  For example, § 459 can be applied to a shoplifter.

The Court of Appeals for the Ninth Circuit then affirmed this ruling when Mr. Deschamps appealed the ruling.  The Ninth Circuit found looking at the plea colloquy was proper.

Mr. Deschamps than appealed to the U.S. Supreme Court.  The Supreme Court reversed the lower court’s rulings, ruling in favor of Mr. Deschamps.  The practical consequences of this were that it saved Deschamps at least a five year sentence enhancement under the ACCA.

The Supreme Court found that, in looking at Penal Code § 459, there was no requirement of violence.  Therefore, the ACCA enhancement was inapplicable.  The Supreme Court followed Taylor v. United States (1990) 495 U.S. 575, which adapted a “formal categorical approach.”  Sentencing courts may “look only to the statutory definitions,” for example, the elements of a defendant’s prior offenses, and “not to the particular facts underlying those convictions." Taylor, at 600.

In Deschamps’ case, the U.S. Supreme Court found, Penal Code § 459 was broader then generic burglary.  Furthermore, Justice Kagan wrote, “if the statute sweeps more broadly than the generic crime, a conviction under the law cannot count as an ACCA predicate, even if the defendant actually committed the offense in its generic form.”  She continued, “here, § 459 does not fit that bill because California defines burglary so broadly as to include shoplifting.” Taylor, at 591.

In concluding, the Supreme Court conceded that Deschamps may have broken and entered the grocery store at issue and consequently committed burglary as envisioned as a predicate offense for a sentence enhancement under the ACCA - but a conviction of violating Penal Code § 459 does not qualify as a crime of violence for the ACCA.

Deschamps must have felt happy that the U.S. Supreme Court found him correct on this issue.
The citation for the U.S. Supreme Court ruling discussed above is Descamps v. United States (2013) 570 U.S. 254, 133 S. Ct. 2276, 186 L. Ed.2d 438.
For more information about being in possession of a firearm, click on the following articles:
Contact Greg Hill & Associates