To a person who may not have much exposure to federal sentencing laws, it may seem logical that the Federal Armed Career Criminal Act (ACCA) would apply to folks who have a history of  committing more serious crimes while armed with a weapon, such as a firearm or knife.  Someone who has committed domestic violence by pushing one’s wife, or even hitting her, would not be considered as an “Armed Career Criminal,” right?

In a Nutshell: Felony domestic violence, a violation of California Penal Code § 273.5, is a qualifying offense under the Federal Armed Career Criminal Act, which can mean, if defendant has two more qualifying offenses under the act, that defendant then faces a minimum sentence of 15 years in federal prison.

The answer is counterintuitive: felony domestic violence, as defined under California Penal Code § 273.5, is a qualifying violent felony under the Federal Armed Career Criminal Act.  Under the ACCA, if that person has committed three separate qualifying offenses under the ACCA, the person must be sentenced to a mandatory minimum of fifteen years in federal prison.  18 U.S.C. § 924(e)(1).
This sobering reality played out in the case of Mr. Steven Gerard Walker, who was prosecuted in United States District Court for the Eastern District of California for being a felon in possession of a firearm, a violation of 18 U.S.C. § 922(g)(1).
Mr. Walker had three prior felony convictions for “willfully inflicting corporal injury” on a spouse or cohabitant in violation of California Penal Code § 273.5.  His three prior convictions took place in 1998, 1999 and 2014.
Mr. Walker admitted to being a felon in possession of a firearm, but refused to admit he had been convicted of three separate incidents of violating § 273.5.  The United States Assistant Attorney General then presented certified copies of the prior judgments.  The judge then determined that Walker had been convicted of three separate violent felonies, requiring he be sentenced to a minimum fifteen-year sentence under the ACCA.
Walker appealed this finding on two grounds, but this article will limit its scope to Walker’s argument that his three prior convictions under 273.5 do not qualify as a violent felony under the ACCA.  Indeed, 273.5 is not considered a violent felony under California law.
The appeal went up to the United States Court of Appeals for the Ninth Circuit. 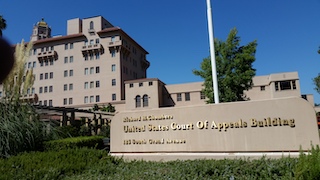 U.S. 9th Circuit Court of Appeals Pasadena
The Ninth Circuit began its analysis by noting that a prior conviction may qualify as a violent felony only if it “has an element the use, attempted use or threatened use of physical force against the person of another.”  18 U.S.C. § 924(e)(2)(B)(i).
Walker argued that his convictions under § 273.5 cannot qualify because intent to harm the victim is not an element of that crime and provided citations to several reported decisions wherein courts held intent to harm the victim was not something a prosecutor needed to prove.
The Ninth Circuit responded by saying Walker’s argument “collides headlong with our precedents.  In United States v. Laurico-Yeno (9th Cir, 2010) 590 F.3d 818, 821-823, we determined that § 273.5 was a ‘crime of violence’ for purposes of U.S. Sentencing Guidelines § 2L1.2(b)(1)(A).”  “Crime of violence” under the U.S. Sentencing Guidelines manual is defined identically to the phrase “violent felony” in the ACCA.
Furthermore, in Bannuelos-Ayon v. Holder (9th Cir., 2010) 611 F.3d 1080, 1086, the Ninth Circuit held that a violation of § 273.5 “is a categorical crime of violence” for the purposes of 18 U.S.C. § 16(a), which has language identical to § 924(e)(1) and U.S.S.G. § 2L1.2.
In reviewing such caselaw, the Ninth Circuit commented “we find no reason to depart from our prior reading of § 273.5 here.”  There is no change in the underlying law, i.e. § 273.5.
Consequently, the Ninth Circuit held that “[d]espite his best efforts, Walker has failed to demonstrate that our prior decisions are obviously inconsistent with intervening Supreme Court decisions.  We therefore cannot and will not declare our prior precedents causa no grata.  The judgement is affirmed.”
We bring this short summary to the reader’s attention to illuminate the often surprising and counterintuitive manner in which federal sentencing laws are interpreted.  It is wise, in other words, to look into the interpretation of a federal sentencing law before quickly concluding that it would not apply to someone.
The citation for the United States Court of Appeals for the Ninth Circuit ruling discussed above is United States v. Steven Gerard Walker (9th Cir., 2020) 953 F.3d 577.
For more information about federal sentencing, please click on the following articles:
Contact us.
Serving Torrance, Long Beach, Compton, Airport Courthouses and Other Courthouses.