The Armed Career Criminal Act, enacted in 1986 at 18 U.S.C. § 924(c), does not define burglary.  However, it is included as one of several violent felonies under the Act as qualifying offenses for a mandatory 15-year federal prison sentence because of its burglary’s “potential for harm to persons.” Taylor v. U.S. (1990) 495 U.S. 575.  When a defendant has three or more prior violent felonies, he or she is eligible for sentencing as an Armed Career Criminal.

Brief Synopsis: If one is facing sentencing under the Federal Armed Career Criminal Act, knowing if federal law will consider a prior California conviction for burglary is critical.  Will it trigger a mandatory 15 year federal prison term?  Reading about how the federal court analyzed a prior burglary conviction under Michigan law, in the article below, may help.

In looking to the crime of burglary, courts have explained that Congress, in enacting the Act, “did not want to specify an exact formulation that an offense must meet in order to count as burglary for enhancement purposes.”  Taylor at 599.
This became an issue for Jamar Quarles.  On August 24, 2013, police officers in Grand Rapids, Michigan responded to a 911 call from Chastity Warren, who was Mr. Quarles’ girlfriend.  She told police that she had escaped from him after he had threatened her at gunpoint and hit her.
As police were speaking with Quarles at the scene, Quarles drove by and police arrested him.  They later searched his home and found a semiautomatic pistol.  He was then charged with being a felon in possession of a firearm in violation of 18 U.S.C. § 922(g)(1).
Quarles had at least three prior convictions that appeared to qualify as violent felonies under the Federal Armed Career Criminal Act.  These were: (1) a 2002 Michigan conviction for third-degree home invasion stemming from an attempt to chase down an ex-girlfriend who sought refuge in a nearby apartment; (2) a 2004 Michigan conviction for assault with a dangerous weapon based on an incident where Quarles held a gun to the head of another ex-girlfriend and threatened to kill her; and (3) a 2008 Michigan conviction for assault with a dangerous weapon arising from an altercation with another man and that same ex-girlfriend in which Quarles shot at the man. 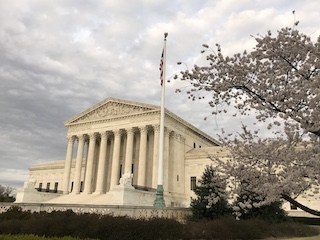 U.S. Supreme Court
In sentencing after pleading guilty to being a felon in possession of a firearm in violation of 18 U.S.C. § 922(g)(1), Quarles argued that his 2002 Michigan conviction for third-degree home invasion did not qualify as burglary under 924(e).
Under federal precedents that guided the District Court’s analysis, the court had to decide whether Michigan’s statute under which Quarles was convicted in 2002 was broader than the generic definition of burglary set forth in Taylor, supra, in which case the prior conviction would not qualify as a prior conviction under 924(e), or instead, whether the Michigan statute “substantially corresponded” to or was narrower than the generic unlawful or unprivileged entry into, or remaining in, a building or structure, with intent to commit a crime.”  Taylor at 599.
Under the Michigan statute defining third-degree burglary, a person commits third-degree home invasion if he or she “breaks and enters a dwelling or enters a dwelling without permission and, at any time while he or she is entering, present in, or exiting the dwelling, commits a misdemeanor.”  Michigan § 750.11a(4)(a).
Quarles argued that the Michigan statute is broader than the generic definition of burglary because it criminalizes situations where the defendant forms the intent to commit a crime “at any time while unlawfully remaining in a dwelling, not at the moment when the defendant is first unlawfully present in the dwelling.
The District Court rejected that argument and sentenced Quarles to 17 years in federal prison.
The Sixth Circuit affirmed and Quarles then appealed to the U.S. Supreme Court, which granted certiorari.
The U.S. Supreme Court affirmed the Sixth Circuit.  The Supreme Court noted that in Taylor itself, the crime at issue included a definition that included “remaining in” like Michigan’s law.  As such, the Court concluded that the Michigan statute underlying Quarles’ 2002 conviction was not broader than generic burglary, and substantially corresponded to or was narrower than generic burglary, meaning this prior conviction was properly considered as a prior violent felony under the Armed Career Criminal Act.
The citation for the United States Supreme Court ruling discussed above is Jamar Alonzo Quarles v. United States (2019) U.S. ____,  S. Ct.  , L. Ed. 2d
For more information about out-of-state convictions being relevant in sentencing within California, please click on the following articles:
Contact us.
Serving Torrance, Long Beach, Compton, Airport Courthouses and Other Courthouses.