The search of a home is always a hot issue, especially when the search uncovers items that could lead to years in prison. The Fourth Amendment, made applicable to each state, provides that “no warrants shall issue, but upon probable cause, supported by oath or affirmation, particularly describing the place to be searched, and the persons or things to be seized.”  As our U.S. Supreme Court said, the “physical entry of the home is the chief evil against which the wording of the Fourth Amendment is directed.” Payton v. New York (1980) 445 U.S. S73, 585-586.

In a Nutshell:  If an officer relies upon a search warrant’s authorization to search a home in good faith and finds contraband, but the affidavit in support of the warrant is later found erroneous, the contraband is not necessarily suppressed as illegally obtained evidence.  It may still be admissible and a conviction can result.

The warrant leading to the search was particularly troubling.  The officer seeking the warrant wrote about a conversation he had about six months earlier, wherein an arrestee told him that he bought heroin from “a guy named Robert who lives on Summer Street.”  Mr. French, in fact, lived on Summer Street.  The officer then ran a registration check on a black truck parked outside French’s house and it showed the vehicle was registered to Robert Samuel French.

After the search of the home, the Humboldt County District Attorney’s office charged French with four felonies.  Smith filed a motion to suppress the evidence gathered pursuant to the search warrant, arguing that the informants lacked credibility, and therefore gave unreliable information as they were in custody on drug charges themselves.  The trial court denied the motion and French appealed.

The first Appellate District, in People v. French (2011 DJDAR 17906), agreed with French, but ultimately, however, affirmed the trial court on the grounds that the “Good Faith Exception” applied.

The First Appellate District first noted that a magistrate, before issuing a warrant, must establish the sufficiency of the informant’s reliability and the basis of knowledge, although there is no rigid formula for determining these factors.  In French’s case, the court found there was no basis to assign “much weight to any of the informant’s statements.”  None of the informants were reliable and none provided significant detail.  Indeed, “information received from sources who are themselves the focus of pending criminal charges or investigations is inherently suspect.”  Thus, the Court found that the search warrant was unsupported by probable cause. 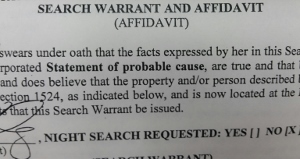 The court then discussed the Good Faith Exception to the Exclusionary Rule.  The court commented that if an officer could have reasonably believed the warrant had probable cause, the evidence will not be suppressed.  Here, the court found it was objectively reasonable for the officer to rely on the warrant, so the drugs and associated items remained admissible, but only by an exception.  French, consequently, by this appeal, “won the battle, but lost the war.”

For more information about shoplifting and vandalism, click on the following articles:
For case summaries of selected cases our firm has handled, click here.