In 1989, our client was 23 years old.  He had been out drinking in downtown Los Angeles, and on his way home on northbound San Fernando Boulevard, he ran head-on into another car.  Our client’s breath alcohol content (BAC) was 0.18% and his blood measured the same concentration.
Our client was arrested for felony DUI because the occupants of the other car, a woman then age 33 and a man then age 31, both suffered cuts, but nothing worse thankfully.  Our client suffered a cut to his hands and his nose from broken glass.
The case was filed in the Metropolitan Courthouse at 1845 South Hill Street and our client appeared for his arraignment.  He was relieved to find out that the case was filed as a misdemeanor, not a felony, but the plea bargain offered by the Los Angeles City Attorney to resolve the case involved 90 days in Los Angeles County Jail.
Our client knew he’d lose his job if he was jailed for 90 days, so he stopped going to court.  He lived the next 30 years with no problem until one day in 2019 when he was driving for Uber. 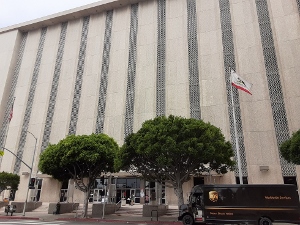 Metro Court
Now 53, he was told by Uber that a periodic background check for him revealed he had a bench warrant outstanding from the Metropolitan Court from 1989.  Uber told our client he needed to have the bench warrant recalled to remain a driver for Uber.
The client called Greg Hill & Associates and spoke with Greg Hill.  The client explained the basic facts of the case, even remembering his blood alcohol content, the last plea bargain offered and Metropolitan Courthouse.  Greg explained that it may be hard to get the docket on the case, let alone the court file to confirm the bench warrant and get the case number, but he would try.
Greg found the court docket and called the client back, advising what the docket showed and that he could appear on the client’s behalf in the Metropolitan Courthouse to request that the judge recall the warrant and then, if this was done, try to resolve the case.
Greg explained that, ironically, it might be easy to resolve the case because the police officer who made the arrest, as well as the two occupants of the other car, may be unavailable due to having died, moving to another area far away and not being willing to come to court or being unavailable because the prosecutor simply cannot find them.
Greg also mentioned that the client’s blood sample may have been destroyed, or if it remains, retesting it would be meaningless because all the blood most likely evaporated or has degraded so much that a retest would be meaningless.
Greg then appeared on the client’s behalf in the Metropolitan Courthouse and discussed the case with the prosecutor, a gentleman from the Los Angeles City Attorney’s office with whom Greg had handled many cases over the years.  Greg and the L.A. City Attorney looked at the police report and the prior offers written in the file by the judge, which is unusual.
The L.A. City Attorney marveled at the fact that our client came back to court after all these years and openly guessed that it was at the direction of an employer, which Greg confirmed.  The L.A. City Attorney then commented that he bet he could not find the police officer or either of the two victims, so he would just resolve the case for a failure to appear in court, Vehicle Code § 40508.  The two charges of DUI, Vehicle Code § 23152(a) and Vehicle Code § 23152(b) would be dismissed.
The terms of the plea bargain would be two years of informal probation and ten days of community service, plus restitution if the victims could be found.
The client was ecstatic to resolve the case on such lenient terms.  He feared some jail time and losing his driver’s license, but this would not happen with the two DUI charges dismissed.  He was very happy.
For more information about bench warrant and DUI issues, please click on the following articles:
Contact us.
Serving Torrance, Long Beach, Compton, Airport Courthouses and Other Courthouses.