Our client was arrested during a raid of his home in Pomona by over 30 armed police officers.  The officers stormed his house at 5:30 a.m., breaking through the locked front door and pulling him out of bed.  The officers then spent several hours combing through his entire house, looking in closets, under beds, opening every drawer and “tossing the place upside down.”

Officers alleged that our client and his brother, along with the assistance of a soldier in Afghanistan, had stolen the identities of five or more U.S. Army servicemen overseas serving in Afghanistan and used their personal information to open over twenty lines of credit at several banks.  The three then allegedly used all the money in each line of credit to buy cars, drugs and other luxury items.

The scheme was allegedly quite sophisticated, with the use of intermediary bank accounts associated with other people’s names to wash the money through before our client and his two co-defendants transferred it to their own bank accounts to use it for themselves.

Our client was held in Los Angeles County Jail for a few days before posting bail of $100,000.  He was quite upset at missing work and very confused about the charges.

After his family posted a bail bond, he came to speak with Greg Hill & Associates.  He professed total ignorance of the identity theft and remarked he did not even have a computer or even an e-mail address.  This was true and belied the officer’s claims that he had used a sophisticated series of online transfers from one financial institution to another.  Our client did not even know what an online transfer was.

Indeed, the client did not even know how to send text messages or surf the Internet on his own phone.  He was not interested.  He said he like the slower pace of life.
On the day of the arraignment in the Clara Shortridge Foltz Criminal Justice Center, or CCB, in downtown Los Angeles, the client and Greg Hill appeared.  At first, curiously, there was no filing against the client and his brother.  There was a separate filing against the U.S. serviceman in U.S. District Court (federal court). 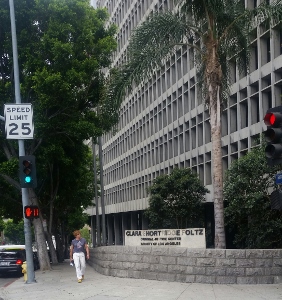 Clara Shortridge-Foltz Superior Courthouse (CCB)
Therefore, Greg and the client waited for the complaint to be filed, which could be at any time during the day.  The two, along with the client’s brother and his attorney, waited – and waited – and waited.  A late filing is not uncommon in Downtown Los Angeles, especially on bigger cases.

While patiently waiting for the prosecutors to file the case, Greg discussed the matter with the handling prosecutor and explained that our client could not possibly have violated Penal Code § 530.5(a), felony identity theft.  Greg explained that the client did not even have an e-mail address or a laptop computer.  He was simply not very technically savvy.

The morning at court stretched into the afternoon with still no filing.  Finally, 4:30 p.m. arrived with no filing and the client and Greg left the court, dumbfounded.

Surely the filing would take place later, the two thought.  Perhaps in a few days.

Two months later, however, our client received notice that his case was a DA reject.  Apparently, the evidence seized from our client’s house did not corroborate any role of our client in the identify theft as believed and therefore, charges were not filed against our client.  Greg’s frank conversation with the prosecutor about our client’s lack of technical savvy confirmed the prosecutor’s suspicion that the client simply was not involved in such a sophisticated scheme.
For more information about the issues in this case summary, click on the following articles:
Contact us.