Our client, age 42, was a commercial banker.  His life was going well.  He and his wife had a two-month old son.  Our client was looking forward to taking the FINRA Series 7 examination to increase his qualifications, scope of work and pay.
For unknown reasons, he was out drinking at the bars in downtown Downey.  As the bars were closing, he was walking back to his parked car near the corner of Second Street and Downey Avenue.  He had been in Bastards Canteen as his last stop. 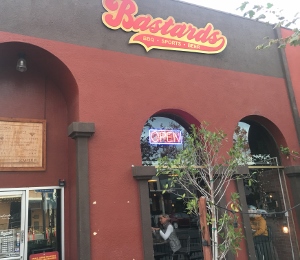 Bastards Canteen in Downey
As he was walking back to his car, he felt the need to urinate.  He went back to Bastards Canteen, but was denied re-entry, as it was now about 2:00 a.m.
He then proceeded towards his car and before opening his car door, decided to urinate next to his car.  Just as he did so, a black and white Downey Police SUV drove by him and spotted him in the act of urinating.  Our client hurriedly finished urinating and tried to get in his car, but the police car had stopped and an officer was approaching him.
The officer asked our client if he knew urinating in public was against the law and our client replied that he did not think it was illegal.  The officer then advised him that it was illegal and that he would be giving him a ticket for this, as it violated the Downey Municipal Code.  The officer then asked our client for his driver’s license and our client produced it for the officer.
The officer then filled in the ticket with our client’s identifying information and had our client sign a promise to appear in the Downey Superior Court in about eight weeks.  Our client signed the ticket and the officer handed him his yellow (canary colored) copy.
The client was confused about what he had just been handed.  The letter “M” was circled which he believed meant the charge level was misdemeanor.  This greatly concerned our client, as he had no prior criminal history.
He called up Greg Hill & Associates the next day and discussed the ticket with Greg Hill.  The client was very concerned how such a conviction might affect his career as a commercial banker and his employment in any capacity in the future.  The client explained that he and his wife had a young child and his wife did not work.
In response, Greg confirmed that indeed the charge, a violation of Downey Municipal Code (DMC) section 4115 was a misdemeanor.  Greg further explained how such tickets are often handled in the Downey Superior Court, as Greg had represented many defendants on such tickets in the past.
Greg recommended that the client attend at least ten Alcoholics Anonymous (AA) meetings prior to the arraignment and to give Greg a copy of the AA sign-in sheet to take with him to the arraignment.  Greg explained that he would appear on the client’s behalf in the Downey Superior Court so the client could stay at work on the day of the first court appearance, the arraignment.
Greg further requested the client’s resume, but cautioned the client that the Downey City Attorney and he often to do not discuss the cases or the defendant in such depth that the client’s resume is reviewed, but it is good for Greg to have the client’s resume available just in case this is helpful toward negotiating.
The client then did attend ten AA meetings prior to the arraignment.  He also provided Greg the filled-in sign-in sheet showing such attendance.  He also provided Greg his resume.
Greg then did appear at the Downey Superior Court and got the very short police report of the incident involving the client.  Greg reviewed the police report, which failed to mention that our client attempted to avoid urinating in public by going back to Bastards Canteen, but that its staff refused him in to use the restroom.  Greg then discussed the case facts with the Downey City Attorney and showed the city attorney our client’s AA sign-in sheet.
The city attorney proposed to add a count two to the complaint.  This count would be to allege a violation of Downey Municipal Code § 4115 as an infraction.  The client, the city attorney proposed, would plea no contest to the infraction and the misdemeanor count of violating the same code section would be dismissed.  Our client would then agree to punishment of a $50 fine, plus penalties and assessments for the infraction.  Greg agreed to this for this client.
Such a conviction would avoid a misdemeanor conviction with informal probation and a misdemeanor criminal history, which might compromise a Series 7 license from FINRA.  It also would be seen as more minor in nature as an infraction is the same charge level as a parking ticket and thus is regarded as minor in character.  The total fine of $50 plus penalties and assessments would be about $350.
The client was very happy with this resolution of his case.
For more information about some of the issues discussed in this summary, please click on the following articles:
Contact us.
Serving Torrance, Long Beach, Compton, Airport Courthouses and Other Courthouses.