It was 1:39 a.m.  Our client, age 26, had just emerged from the Lock & Key bar on Downey Avenue.  He had enjoyed a few drinks, but was fine to drive.  He was walking back to his car, parked behind the Peking Chinese Restaurant, when he realized he needed to urinate.  He therefore walked back to Lock & Key, but the doorman there would not let him in to use the restroom.  Our client went across the street (jaywalking across Downey Avenue) to Joseph’s Bar, but was told the same thing. 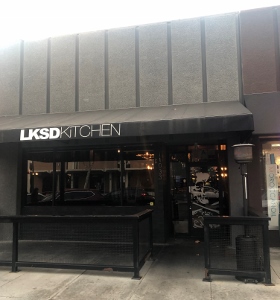 Lock & Key Bar in Downey
He then decided to urinate back near his car.  As he was zipping up his pants and fastening his belt, a Downey police officer walked up to him and asked him if he had just urinated on the ground.  Our client, standing next to a puddle, sheepishly said yes, he had.
The officer then asked our client for his driver’s license and proceeded to complete a ticket for our client, citing him for a violation of Downey Municipal Code (DMC) § 4116.  He handed the ticket to our client and asked him to sign a promise to appear in the Downey Municipal Court in about six weeks.  Our client signed the bottom of the white ticket and was handed a yellow copy.  The officer was very quick in writing up the ticket, our client said because it seemed like he was in a rush to find other people urinating in the same parking lot.
Our client drove home, stunned by receiving such a ticket and sensing it was more serious than the routine manner in which the ticket was issued.
The following day, the client looked up DMC 4116 and read about what the Internet said it was for (“Illegal Dumping”) and, with a little more searching, found out the maximum punishment associated with it: six months in county jail.  He called up Greg Hill & Associates and spoke with Greg Hill about the ticket.
The client explained that he had not really wanted to urinate in public, but only did so after trying to get back into the Lock & Key to use its restroom and then when they said no, he headed across the street to Joseph’s, but it also told him he could not enter.
The client was a licensed physical therapist (LPT), so he was worried that a conviction for a misdemeanor would affect his state license, perhaps causing it to be suspended for a while.  He had just earned such a license, so he was sad that such a ticket might cause his license status to be affected.
Greg explained, in response, that the client’s experience in trying to use a regular restroom and being told he could not enter for use of the restroom was extremely common, as bars were aware that folks often like to re-enter a bar to start a fight, especially late at night.  Greg also explained that, in his experience, public urination cases in Downey often are resolved as infractions, which is a less serious level of a charge, especially if the client attends ten Alcoholics Anonymous (AA) meetings before the arraignment and lets Greg show these to the Downey City Attorney in court.
The client asked Greg about his experience handling such cases in Downey and Greg explained a few other similar cases there with resolutions as infractions, commenting that all such cases scheduled on Thursdays in Downey.
The client then retained Greg Hill & Associates and attended ten AA meetings prior to the arraignment.  Greg also asked for a photocopy of the client’s LPT license and a resume so he could take it to court as well, just in case it was necessary in speaking to the Downey City Attorney.
Greg then appeared in the Downey Superior Court on the client’s behalf and did indeed show the Downey City Attorney our client’s attendance at ten AA meetings.  The Downey City Attorney then agreed to resolve the case as an infraction with a $50 court fine, plus penalties and assessments, or about $215.
The client was happy with this resolution, as he knew he needed to report to the California Medical Board any conviction for a misdemeanor or a felony, but not an infraction.  He also understood that there was no probation associated with an infraction, which relieved him as well.
For more information about public urination, please click on the following articles:
Contact us.
Serving Torrance, Long Beach, Compton, Airport Courthouses and Other Courthouses.