Our clients often look at the charges alleged against them and then comment something to the effect of, “well, is this allowed?  I am being charged with three different crimes for doing one thing.”  Our response is, “no under most circumstances.”  The following case exemplifies one of those circumstances.

Michael Hong Louie and Soriyaa Ek were both “validated” gang members.  They were convicted of arson, criminal threats and street terrorism.  The underlying facts are that Louie and Ek, in January of 2007, allegedly set fire to a Stockton, California, apartment of a woman who repeatedly reported gang activity involving Louie and Ek in her neighborhood.  The crime could be characterized or interpreted as retaliation.  Louie and Ek, in an ironic way, also confirmed the truth of the woman’s reports.

Both defendants challenged their sentences for street terrorism (eight months for Ek and two years for Louie) because their sentences were based on the same underlying acts of threatening the witness and burning her apartment, acts for which they received punishment for dissuading a witness and arson, respectively.  In other words, the punishment for street terrorism was redundant and thus unfair because the elements of each were the same.  This constituted cruel and unusual punishment, they argued, in violated of the U.S. Constitution.

The Third Appellate District, in People v. Michael Hong Louie (2012 DJDAR 1777) agreed.  The Court relied upon Penal Code § 654, which prohibits punishing an act or omission under more than one provision of the law.  The Third Appellate District commented that punishment is distinguishable from convictions, noting that a defendant may be convicted on multiple theories for the same act. 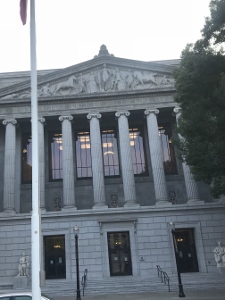 Third Appellate District Court of Appeals in Sacramento
Here, however, in the majority opinion, the appellate court stressed the principal that a defendant’s punishment be commensurate with their culpability and that the gang enhancement, which resulted in indeterminate life terms.  The sentence in this case, the majority said, was indeed commensurate with each defendant’s culpability.

The concurring opinion came to the same conclusion, but via a different reasoning.  It pointed out the membership in a gang is a status and not an act.  Therefore, it would be unjust to punish defendants for their status alone.  In other words, without an independent act that was otherwise not punished, any sentence in this case would be proper.  Here, however, defendants were already punished for arson and dissuading a witness.

We bring this reported decision to the reader’s attention because it is common for prosecutors to allege violations of the law in the alternative, i.e. joyriding and grand theft for taking a car.  While the elements of each allegation are similar, they do differ nonetheless.  This is proper pleading, but if defendant is punished for both crimes, defendant or his counsel must object or challenge the duplicative nature of the conviction to prevent sentencing on both crimes in violation of Penal Code § 654 and the Eighth Amendment.

For more information about sentencing issues, please click on the following articles:
For case summaries of selected cases our firm has handled, click here.