Home
Other Information
Criminal Defense Articles
Does Prop 47 Apply to Offenses Related to Drugs or Theft?

Does Prop 47 Apply to Offenses Related to Drugs or Theft?

Anyone familiar with the basic provisions of Proposition 47 knows that it only applies to six specific low level theft offenses and three low-level drug offenses.  However, as is true with many new laws, there is often confusion over whether it helps offenses related to the specified offenses.

The case of Colette Jeon Eandi certainly exemplifies this situation with new legislation.  She was arrested with methamphetamine in her possession in June of 2014.  At the time, police released her on her own recognizance with a promise to appear in court for her arraignment in July of 2014.

Ms. Eandi did not appear for her arraignment in July and the judge responded by giving her a second chance.  The arraignment was continued to August, but on the date in August, she again failed to appear in court.  The judge then issued an arrest warrant. 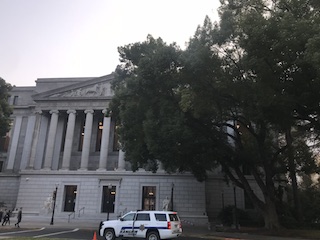 Court of Appeal Third Appellate District Sacramento
Ms. Eandi was eventually arrested on October 31, 2014 and taken into custody.
The Butte County District Attorney’s office charged Eandi with failing to appear on a felony charge of possessing a controlled substance (Penal Code § 1320(b)) with an enhancement for committing this offense while released from custody on her own recognizance (Penal Code § 12022.1), as well as the underlying felony charge of possession of a controlled substance.

The prosecution (“the People”) appealed this ruling.  The appeal was filed at and then ruled upon by the Third Appellate District in People v. Colette Jean Eandi (2015 DJDAR 9585).

The appellate court noted from the outset that Penal Code § 1320 was not included among the offenses explicitly included in the text of Prop 47.

The appellate court then commented that “failure to appear is a crime of deceit premised on a defendant’s breach of a contractual agreement.”  People v. Jenkins (1983) 146 Cal. App. 3d 22, 28.  In other words, the “gist” of the offense is a breach of a promise to appear in court, so the ultimate disposition of the underlying offense is immaterial.  See People v. Walker (2002) 29 Cal. 4th 577, 583 (it is the legislative view that punishment for jumping bail under section 1320.5 is proper regardless of the disposition of the underlying offense).

Therefore, the appellate court distilled down the appeal to the real issue: does Prop 47 have a collateral retroactive effect such that a pending felony drug possession charge at the time of the breach of the promise to appear in August, 2014 becomes a misdemeanor as a matter of law retroactively, having the effect of negating a necessary element of the failure to appear on a felony charge (“…having been charged with … the commission of a felony.”).

The appellate court answered this issue by holding that Prop 47 did not have such a retroactive effect to a failure to appear.  In other words, the Butte County judge had made a mistake.

The appellate court noted furthermore that Prop 47 had retroactive effect only for people currently serving sentences for the six specific three low-level drug and theft offenses, but not other offenses.  Such individuals were required to file petitions for reduction of the offenses from a felony to a misdemeanor.  The judge then could grant or deny the request.

Nothing in the express language of Prop 47 or its legislative history showed intent to have retroactive effect on collateral offenses such as Ms. Eandi’s case for failure to appear.  The court emphasized that when she failed to appear in August of 2014, the drug charge was a felony because Prop 47 had not come into effect yet.

As such, the appellate court accordingly set aside the order of probation and remanded the case for further proceedings on the original complaint.
The citation for the Third Appellate District Court ruling discussed above is People v. Colette Jean Eandi (3d App. Dist., 2015) 239 Cal.App.4th 801.
For more information about Proposition 47, click on the following articles:
Contact us.