Does Prop 47 Apply to the Three Strikes Reform Act?

Not all people are eligible for relief under Prop 47.  If someone is a registered sex offender under Penal Code § 290 or has a “super strike” conviction, the conviction cannot be reduced.  A “super strike” includes offenses such as murder, solicitation to commit murder, possessing a weapon of mass destruction or assault with a machine gun on a police officer or fireman.

When someone seeks resentencing under Prop 47, the judge must conduct a “thorough review” of the petitioner’s criminal history and risk assessment to ensure that they do not pose on an unreasonable danger to public safety.” 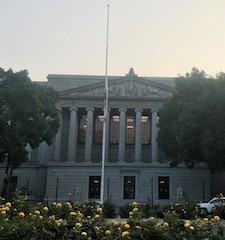 Court of Appeal Third Appellate District Sacramento
Proposition 47 defines “unreasonable danger to public safety “as” an unreasonable risk that a petitioner will commit a new violent felony within the meaning of clause (iv) of subparagraph (c) of paragraph (2) of subdivision (e) of section 667.
Penal Code §667 (e)(2)(c)(iv) lists the following violent felonies: (1) A “sexually violent offense”… (II) Oral copulation… as defined by section 288a, sodomy… as defined by Section 286, or sexual penetration… as defined by Section 289., (III) A lewd or lascivious act.. in violation of Section 288, (IV) Any homicide offense, including any attempted murder offense… (IV) Any homicide offense, including any attempted murder offense… (V) Solicitation to commit murder, (VI) Assault with a machine gun on a police officer or firefighter… (VII) Possession of a weapon of mass destruction… (VIII) Any serious and/or violent felony offense punishable in California by life imprisonment or death.

Clifford Paul Chaney had eight strikes (convictions) involving robberies and burglaries from two separate incidents.  In 2005, he was sentenced to 25 years to life in prison for a conviction for DUI with three prior convictions.

The trial court judge denied Chaney’s petition, finding that Chaney would pose an unreasonable risk to public safety if released.

Chaney appealed the decision.  While his appeal was pending, Prop 47 was passed.  Chaney read the definition of “unreasonable risk to public safety” under Prop 47 and amended his appeal to argue the definition should retroactively apply to him and, if so, the Court of Appeal should reverse the trial court.

Chaney certainly wanted the new definition to apply to his case because the offenses described as an “unreasonable risk to public safety” were all for conduct Chaney had never committed.

Chaney had argued in his amended appeal that In re Estrada (1965) 63 Cal.2nd 740 applied.  In Estrada, the California Supreme Court ruled that when the legislature amends a statute to lessen punishment, it has “obviously determined that its former penalty was too severe and that a lighter punishment is proper.”  The inevitable inference is that the lighter should apply retroactively.

However, the Court of Appeal in Chaney ruled that Estrada did not apply to the Three Strikes Reform Act because Prop 47’s definition of “unreasonable risk to public safety” does not apply to reduce punishment for a particular crime.  Rather, it prevents reduction of punishment.

Consequently, Chaney’s amended appeal was denied and we have a more clear understanding of the new Prop 47 and how its application is limited.
The citation for the Third District Appellate Court ruling discussed above is People v. Clifford Paul Chaney (3d App. Dist. 2014) 231 Cal.App.4th 1391, 180 Cal.Rptr.3d 443.
For more information about the issues in this article, click on the following articles:
Contact us.