A warrantless search of a car when it is impounded is proper as an “inventory search” when the process aims at securing or protecting a car and its contents and is performed strictly according to standard police procedures.  It cannot be a pretext for rummaging throughout the car to look for evidence of a crime.

Defendant Saul Zabala was stopped for a traffic infraction, but was also discovered to be driving on a suspended license by a Santa Clara County Sheriff’s deputy.  The female deputy decided to impound the car, so the car was searched as part of a standard inventory search.  Such a search can include of areas where people commonly put items of value, such as in the glove compartment, the center console, the trunk and under the driver’s seat.
In conducting the inventory search, she found four blue baggies filled with equal amounts of a white powdery substance in a paper bag under the driver’s seat.  The deputy showed the baggies to another deputy, who was searching the passenger area.  The other deputy thought the white substance was cocaine.
The deputies then tested the substance with a field kit and it was found negative as a controlled substance, but the deputies suspected it was a cutting agent be mixed with a controlled substance to increase its volume.
After examining the baggies, the male deputy noticed that the radio console “looked loose, like it had been manipulated previously.”  He explained, “the clearance between the actual dashboard and the plastic trim console looked enlarged, like it had been removed and replaced and I thought it could have been indicative of a hidden compartment in the vehicle.”
Using his pocket knife, the deputy then removed the console, which in fact was loose, and between the air conditioning ducts behind the stereo he found several bags of a white crystalline substance that he recognized as methamphetamine.
The officers then arrested Zabala for transporting a controlled substance for sale (Health & Safety Code § 11379) and driving with a suspended license (Vehicle Code § 14601.1). 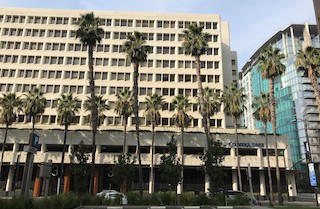 Court of Appeal Sixth Appellate District San Jose
At trial, Zabala moved to suppress the drugs found behind the fake radio console as found only because the officer exceeded the scope of a normal inventory search.
The Santa Clara County judge hearing the motion denied it, finding that the drugs were found within the scope of a normal inventory search as a valid exercise of the officers’ community caretaking function.  South Dakota v. Opperman (1976) 428 U.S. 364, 368-369; Colorado v. Bertin (1987) 479 U.S. 367, 381.
Defendant then pleaded no contest and admitted a prior felony conviction.  Pursuant to a plea bargain, he was sentenced to three years in state prison with a consecutive three-year term for one of the prior conviction allegations.
Zabala then appealed the trial court’s motion to suppress ruling to the Sixth Appellate District in Santa Clara.
The Sixth Appellate District Court of Appeal affirmed the trial court, but for a different reason.  It found that the search was valid under the automobile exception to the warrant requirement.
The court then surveyed the inventory search caselaw and cases involving searches of closed containers found in cars.  It then looked at cases involving contraband discovered in closed containers hidden in a vehicle and analogized this case to United States v. Best (8th Cir. 1998) 135 F.3d 1223 and United States v. Lugo (10th Cir. 1992) 978 F.2d 631.
In both such cases, the court found that the officer’s search exceeded the scope of an inventory search (see People v. Andrews (1970)) 6 Cal.App.3d 428 (an inventory search does not extend to a hidden compartment), but was a valid search under the automobile exception, based upon the probable cause arising from finding the three baggies in the paper bag under the driver’s seat.
We present this case to the reader to exemplify how there are overlapping exceptions to the warrant requirement that can apply and how, here under the totality of the circumstances (with the officers finding the three baggies of a white substance in particular) led to probable cause for a more intrusive search under the automobile exception.
The citation for the Sixth Appellate District Court ruling discussed above is People v. Saul Zabala (6th App. Dist., 2018) 19 Cal. App. 5th 335, 227 Cal. Rptr. 3d 878.
For more information about inventory searches and the automobile exception to the warrant requirement, please click on the following articles:
Contact us.
Serving Torrance, Long Beach, Compton, Airport Courthouses and Other Courthouses.