Home
Other Information
Criminal Defense Articles
Does Consent to Search a Vehicle Mean Just One Search?

Does Consent to Search a Vehicle Mean Just One Search?

Voluntary consent to a search is one such exception.  The scope of such consent is “objective reasonableness,” meaning what would a typical reasonable person believe the consent covered.

Why This Article Matters:  If a police officer asks, “May I search your car?” such a question really asks if that officer or any other officer can search your car and if the car can be searched several times.  An answer of “yes” is, practically speaking, giving the police carte blanche to search the car thoroughly, several times if necessary.

The case of Alejandro Valencia gave new meaning to such a standard.  Mr. Valencia was pulled over in Los Angeles for a broken tail light on April 15, 2010.  At the scene, he then consented to a search of his truck.  A police officer searched the truck and found nothing.  As Valencia had a few warrants related to outstanding traffic tickets, the officers took him in to the police station.  One officer drove Valencia’s truck to the station as a courtesy, so that Valencia’s truck would not remain in the 45th Street area, which is a high-crime area.

Once the truck arrived at the station, another officer not at the arrest, searched the truck.  This officer, Hofmeyer, found three grams of cocaine.  This officer never asked Valencia to consent to a search and Valencia did not even know this officer was searching his truck. 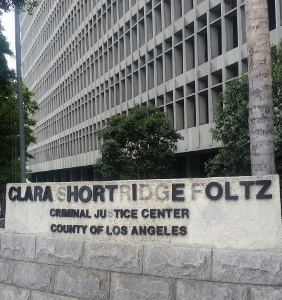 Clara Shortridge Foltz Criminal Justice Center in Downtown Los Angeles
Valencia was then charged in Downtown Los Angeles Superior Court with possession of cocaine for sales (Health and Safety Code § 11351).  Valencia filed a motion to suppress the cocaine, arguing that the second search of his truck exceeded the scope of his consent given back at the arrest location.  Indeed, as phrased, “may I search your car?” limits the permission to search to just the person (“I”) seeking permission.  The question was not “may I and any other officer in my department search your car?”

The trial court denied Valencia’s motion.  Pursuant to a plea bargain, Valencia then pled no contest to possession of cocaine (Health & Safety Code § 11350(a)).  The trial court suspended imposition of his sentence and placed Valencia on Prop 36 (Penal Code § 1210.1) for 18 months.

Valencia then appealed the trial court’s ruling on his motion to suppress.  The Second Appellate District, in People v. Valencia (2011 DJDAR 17647), agreed with the trial court on several grounds that merit our attention, as the facts in this case seem ripe for repetition.  In fact, the same facts may have played out many times before, but the officer’s conduct was not challenged as Valencia did here.

The appellate court then acknowledged that there is no California case ruling on whether officers may conduct more than one search based on a single grant of consent.  However, even Valencia’s counsel agreed that such could reasonably occur if the totality of the circumstances suggested it was intended within the scope of the consent.

Valencia’s counsel said the totality of the circumstances here did not allow multiple searches.  The appellate court disagreed.  It noted that Hofmeyer’s search was only about twenty minutes after the first search, Valencia did not have any increased expectation of privacy at the time of the second search (meaning consent would otherwise need to be received again) since he allowed one officer to drive his truck to the station and the contents of the car did not change from the time of the first search.

Consequently, Valencia’s appeal was denied and his conviction remained in place.

For more information about lawful and unlawful searches, click on the following articles:
For case summaries of selected cases our firm has handled, click here.