Does an Improper DUI Admonition Make the Test Involuntary?

It can seem at times that someone convicted of DUI will argue anything to avoid the conviction, perhaps because of the consequences of losing one’s driving privileges, increased insurance premiums, court fines and fees, alcohol awareness classes, etc.  There is also, we think, a pervasive naivete among many that the judicial system is subject to clever persuasion.

The Gist of this Article: An improper admonition for a DUI test does not make the test involuntary and quite frankly, while such a argument is academically clever, it has to be carefully presented, if at all (with facts that distinguish the pending case from the case summarized below).

The following DUI case, People v. Peter Balov (2018 DJDAR 4846), tragically epitomizes these perceptions.
Peter Balov was arrested by the San Diego Police Department after an officer observed him abruptly stop his black Range Rover at an intersection when the light turned yellow.  The officer then noticed the odor of alcohol in Balov’s breath and that his speech was slurred.  Balov then agreed to perform some field sobriety tests.  The officer believed he failed such tests and arrested him.
After the arrest, the officer told Balov that he was required to submit to a breath or blood test, but the officer did not tell Balov of the consequences of refusing such a test.  Such consequences, set forth at Vehicle Code § 23612, include suspension of the driver’s driving privileges for one, two or three years, as well as fines and fees.
Nonetheless, Balov stated he would submit to a blood test and the officer drove Balov to the police station for the blood draw.  During the blood draw, Balov was cooperative and never indicated he wanted to refuse the test. 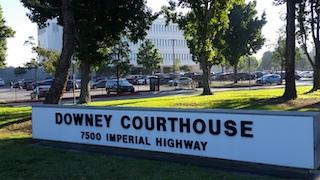 Downey Courthouse
After he was charged with DUI, however, Balov challenged the admissibility of the blood test results, claiming it was inadmissible because the test was coercive and improper since the officer never told Balov of the consequences of refusing such a test.
The trial court denied the motion to suppress, finding that under the totality of the circumstances, Balov voluntarily consented to the blood test and it did not violate the Fourth Amendment as an unreasonable search or seizure.
Balov then challenged the ruling to the San Diego Superior Court’s Appellate Division, which affirmed the trial court.
Undeterred, Balov then appealed the order to the Fourth Appellate District, which also affirmed the trial court.  However, its analysis deserves mention, which is why this article is written.
It is fundamental to first note that a blood draw is a search subject to the Fourth Amendment.  Schmerber v. Cal. (1966) 384 U.S. 757, 767.  Therefore, it is improper if it is unreasonable or performed without a search warrant.  However, the ultimate, or most important, issue is reasonableness.  Brigham City v. Stuart (2006) 547 U.S. 398, 403.
It is “no doubt reasonable for the police to conduct a search once they have been permitted to do so.”  Florida v. Jimeno (1991) 500 U.S. 248, 250-251.  “Voluntariness is a question of fact to be determined from all the circumstances . . .”  Ohio v. Robinette (1996) 519 U.S. 33, 40.
If the validity of consent is challenged, the prosecution must prove it was freely and voluntarily given – i.e. “that it was [not] coerced by threats or force, or granted only in submission to a claim of lawful authority.”  People v. Harris (2015) 234 Cal.App.4th 671, 689-690.
The appellate court then discussed how under Vehicle Code § 23612, a person who drives a vehicle is deemed to have given his or her consent to chemical testing of his blood or breath for the purpose of determining the alcoholic content of his or her blood, if lawfully arrested for certain DUI-related offenses.  The statute applies “broadly and generally to those who drive.”  Troppman v. Valverde (2007) 40 Cal.4th 1121, 1139.
The appellate court then evaluated the totality of the circumstances and found Balov freely consented to the search of his blood.  He never indicated any objection to the test.  Therefore, the consent was valid and the test was proper.
We bring this summary to the reader’s attention to show certain “loopholes” commonly believed to be available in DUI cases really do not exist except in unusual circumstances.
The citation for the Fourth Appellate District Court ruling discussed above is People v. Peter Balov (4th App. Dist., 2018) 23 Cal.App.5th 696.
For more information about police procedures during a DUI, please click on the following articles:
Contact us.
Serving Torrance, Long Beach, Compton, Airport Courthouses and Other Courthouses.