Home
Other Information
Criminal Defense Articles
Does Acquittal for Perjury Bar Case for PC § 115(a)?

About This Article Briefly: An acquittal for perjury (Penal Code § 118) does not bar a conviction for submitting a false document (Penal Code § 115) because the two crimes have different elements.

Saqib Aslam submitted a Department of Motor Vehicles “Request for Confidentiality” form, falsely claiming his brothers were his children, apparently with the intent to collect governmental assistance or other benefits based on a claim of having such children.
The DMV figured out that this was a false claim and he was arrested, charged and later convicted of submitting a false document in violation of Penal Code § 115, a felony.  He was also charged with committing perjury under Penal Code § 118, also a felony, but the jury acquitted him of this charge.
After trial, Aslam moved to vacate the felony Penal Code § 115 conviction, arguing that he really should have been charged with a more specific statute, Vehicle Code § 20, a misdemeanor.  Vehicle Code § 20 makes it a misdemeanor to knowingly make a false statement in a document filed with the DMV.  See People v. Murphy (2011) 52 Cal.4th 81, 86 (citing to In re. Williamson (1954) 43 Cal.2d 651, which held that if a general statute includes the same conduct as a specific statute, the court infers that the Legislature intended that conduct be prosecuted exclusively under the specific statute).
The San Francisco Superior Court judge agreed that Williamson applied and allowed the prosecution to add a third count for violation of Vehicle Code § 20, while vacating the Penal Code § 115 conviction.
Although Aslam argued he should have instead been charged with Vehicle Code § 20, Aslam then moved to dismiss the Vehicle Code § 20 count, saying the Constitutional protection against double jeopardy at the Fifth Amendment to the U.S. Constitution and at Article 15 of the California Constitution, prohibited prosecution under Section 20 because Section 20 is a lesser-included offense of perjury, for which he had already been acquitted. 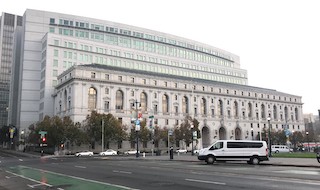 Court of Appeal First Appellate District San Francisco
The San Francisco court judge denied this motion, so Aslam filed a writ of prohibition or mandate to the First Appellate District in San Francisco.
The First Appellate District affirmed the trial court.  It noted that Penal Code § 1023 codifies the prohibition against consecutively charging included offenses, stating, “When defendant is convicted or acquitted or has been once placed in jeopardy upon an accusatory pleading, the conviction, acquittal, or jeopardy is a bar to another prosecution for the same offense charged in an accusatory pleading . . . or for an offense necessarily included therein, of which he might have been convicted under that accusatory pleading.”
Defendant argued that Vehicle Code § 20 is a lesser-included offense of perjury based on the “accusatory pleading test.”  People v. Montoya (2004) 33 Cal.4th 1031, 1035.
The First Appellate District Court rejected this argument, explaining that the accusatory pleading test does not apply to a double jeopardy analysis.  Rather, the appropriate yardstick to apply is the “elements test,” which is based on a statutory comparison of the elements of both crimes. People v. Scott (2000) 83 Cal.App.4th 784, 795-796; see also People v. Spicer (2015) 235 Cal.App.4th 1359, 1371 (elements test, not accusatory pleading test, applies to double jeopardy analysis).
The elements test compares whether each offense contains an element not contained in the other.  United States v. Dixon (1993) 509 U.S. 688, 696.
Here, the First Appellate Court found, Vehicle Code § 20 is not an included offense of perjury, because each offense, as defined by statute, contains an element the other does not.
Section 118, subdivision (a), defines perjury as willfully stating under oath or penalty of perjury any material matter which a person knows to be false.
Vehicle Code § 20 makes it a misdemeanor to knowingly make any false statement or knowingly conceal any material fact “in any document filed with the Department of Motor Vehicles.”
Perjury does not require the document to be filed with the DMV.  Vehicle Code § 20, by contrast, does not require that a statement be made under oath or penalty of perjury, but specifically requires it to be made to the DMV.
Therefore, the First Appellate Court denied Aslam’s appeal.  We offer this case summary because the DMV is a common venue for people trying to submit false documents and the DMV is vigilant in screening such documents for the type of mischief Aslam attempted.
The opinion from the First Appellate District Court in Saqib Aslam v. Superior Court is ordered not to be published under California Rules of Court, Rule 8.1115(a).  This means it cannot be cited to in any form in any submission to a court.
For more information about perjury, offering a false document and double jeopardy, please click on the following articles:
Contact us.
Serving Torrance, Long Beach, Compton, Airport Courthouses and Other Courthouses.