Our client, age 23, had a good job working for an import-export company in Gardena.  He lived with his parents in Long Beach.  For reasons unknown, he went to a friend’s home in San Pedro, where he smoked marijuana (which is legal now under Prop 64) and took not only cocaine and meth, but Xanax, apparently in an attempt to balance out the meth and cocaine.
It was only about 10:30 p.m. and he decided to head back home to Long Beach.  He headed north on Pacific Avenue.  As he was approaching the intersection of Pacific and Seventh Street, he decided to open a 40-ounce Corona.  As he was doing so, he dropped the bottle and it started to spill beer everywhere below his feet.  He quickly reached down to grab the bottle rolling around and veered into oncoming traffic, hitting a 2009 Honda Accord heading the opposite direction.
Our client’s airbag deployed from his 2014 Honda Accord.  Luckily, the driver of the other car was not seriously injured, although he was certainly shaken up. 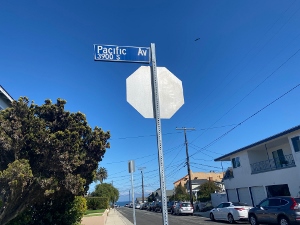 Pacific Avenue
Two officers from the Los Angeles Police Department Harbor Division came to the scene and could smell beer everywhere.  After all, the beer bottle bounced around the inside of the car, spilling beer everywhere due to the force of the impact.  Our client also had slurred speech and seemed drunk.  He also had an unsteady gait, which could have been more from being involved in a head-on car accident than impairment due to alcohol.
Our client was arrested immediately for felony DUI.  He agreed to submit to a blood test, which was taken from him later after he was transferred from the Harbor Division office of the LAPD to the 77th Precinct Jail on Broadway.  By the time the blood was drawn, it was almost three hours after the car accident.
The blood test results were positive for cannabinoids, a cocaine metabolite, benzodiazepines (Xanax) and methamphetamine, but negative for ethanol (so his BAC was 0.0%).
When our client was ultimately released from custody, which was after the arraignment, as his parents wanted to teach him a lesson by not bailing him out, he came to Greg Hill & Associates.  He and his parents described what had happened, but at the time, they did not know the blood alcohol results yet.
The client frankly stated that he thought he had drunk one or two beers, but that was all.  He tried to drink a forty-ounce beer, he conceded, but spilled it before he could even get one swig.
Our office explained what the client faced in court for what was filed as a misdemeanor DUI and what could happen at the DMV.  We explained the three issues that the DMV would consider at the hearing and how, because there was a car accident, probable cause to arrest the client was sufficient, but as to issues one and three, we had arguments, pending the BAC results.
Although we did not know the client’s BAC or even if he had any blood alcohol content after three hours, we reserved a DMV hearing in an abundance of caution.  We did this, we explained to the client, because if no DMV hearing was reserved within ten days of the client’s arrest for DUI, our client’s driving privileges would be automatically suspended after 30 days.  We explained that we often reserved such a hearing only to find out later that the client’s BAC was below 0.08% and the DMV could not suspend the license.
Our office then received the police report and the laboratory results for our client in the mail from the DMV.  We were somewhat taken aback by the lab results showing our client tested positive for meth, marijuana, cocaine and Xanax, but were greatly relieved to see that our client’s blood alcohol level was measured at 0.0%.
In other words, due to the almost three-hour delay before the blood test, our client’s body had metabolized all the ethanol from the one or two beers that he did actually drink prior to driving.
We happily reported to the client the blood results, predicting that the DMV would cancel the DMV hearing after the hearing officer realized the BAC was 0.0%, as the DMV could not prevail on the third issue for a DMV hearing.
This was exactly what happened, as we received a phone call from the DMV hearing officer about two weeks before the hearing, advising us of this, and later, a written notice of set aside.
We happily forwarded this news to the client, who was appreciative that we had reserved a DMV hearing in an abundance of caution to prevent the automatic suspension of his license.
For more information about DMV Hearing Issues, please click on the following articles:
Contact us.
Serving Torrance, Long Beach, Compton, Airport Courthouses and Other Courthouses.