Dismissal in the Interests of Justice (Penal Code § 1385)?

With the new CARE (Consumer Arrest Equity) Act, also known by some as SB (Senate Bill) 393, permitting adults to seek sealing of arrest records and court files when an arrest and/or criminal filing did not lead to a conviction (i.e. there was an arrest, but no case was filed, or a case was filed, but it was later dismissed or defendant was acquitted), there is a renewed interest in knowing more about a case dismissal under Penal Code § 1385.

The CARE Act is codified at Penal Code §§ 851.87 to 851.92.  It is meant to function similar to a Petition for Factual Innocence, which has a very high standard to meet, but with a lower standard to meet to clean up one’s record.
After all, if the record of one’s arrest and / or a case dismissal is removed, deleted or erased from one’s record, that person will no longer be stigmatized by a suggestion that he or she must have done something wrong because police otherwise would not have made the arrest.  Deleting such an entry from one’s criminal history can help that person with employment and housing applications.
The CARE Act, passed into law on October 11, 2017, permits a judge to order the sealing and destruction of an arrest record and / or court filings that were later dismissed under certain conditions, the most common being a dismissal under Penal Code § 1385, a “dismissal in the interests of justice.” 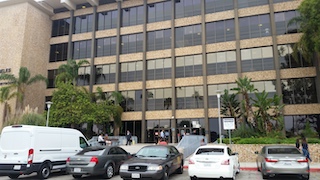 Torrance Courthouse
Before discussing what is a motion for dismissal in the interests of justice, the reader should note that the CARE Act also permits a petition for sealing and destruction of an arrest record and/or court file if a case was dismissed under certain drug diversion programs, i.e. a dismissal under PC 1000 or Prop 36 drug diversion programs, and other less-well known diversion programs such as bad-check diversion (Penal Code § 1001.60), cognitive development diversion (Penal Code § 1001.20), parental diversion (Penal Code § 1001.70), military diversion (Penal Code § 1001.80), mental health diversion (Penal Code § 1001.36) or any one of the more locally-oriented diversion programs such as NJP (Neighborhood Justice Program), an office hearing, ARC (the Anti-Recidivism Course) or PATH (Promising Adults, Tomorrow’s Heroes).
A motion for dismissal in the interests of justice is a motion that defense counsel cannot make.  Only the prosecutor or the judge can make such a motion, but defense counsel may “invite” the judge to make such a motion.  People v. Carmony (2004) 33 Cal.4th 367, 375; People v. Kim (2012) 212 Cal.App.4th 117, 121, n4.
Such a motion may be made under Penal Code § 1385 at any time before, during or even after trial.  People v. Hatch (2000) 22 Cal.4th 260 (after jury deadlocked and mistrial declared); People v. Superior Court (Howard) (1968) 69 Cal.2d 491, 503 (motion after jury returned verdict of guilty); People v. Silva (1965) 236 Cal.App.2d 453, 455 (before trial).  However, 1385 does not allow dismissal after imposition of sentence and rendition of judgment.  People v. Kim (2012) 212 Cal.App.4th 117, 122.
The motion may be made in the jury’s presence.  If the court so dismisses the action, the reasons must be stated “orally on the record.”  The statement of reasons must specify the factual basis on which the court ruled; conclusions are insufficient.  People v. McAlonan (1972) 22 Cal.App.3d 982, 986.
The judge may dismiss all or just part of a case under 1385.  See People v. Fuentes (2016) 1 Cal.5th 218, 224 (gang enhancement dismissal proper).
It should be noted that the court’s discretion to dismiss all or part of a prosecution under 1385 is not absolute.  The discretion must be exercised with “valid legal discretion, amounting to more than the substitution of the predilections of a judge for the alleged predilections of the peace officers.”  People v. Winters (1959) 171 Cal.App.2d Supp 876, 882.  The reason for the dismissal must be that which would motivate a “reasonable judge.”  People v. Hatch (2000) 22 Cal.4th 260, 268.
Appropriate grounds for 1385 dismissal can be insufficiency of the evidence, a plea agreement to certain charges (allowing dismissal of others under 1385), dismissal of certain charges to make a defendant eligible for Prop 36, dismissal of certain charges to allow the prosecutor to add defendants or dismissal because the prosecutor cannot proceed without an unavailable witness.
For more information about the issues discussed in this article, please click on the following articles:
Contact us.
Serving Torrance, Long Beach, Compton, Airport Courthouses and Other Courthouses.