Home
Other Information
Criminal Defense Articles
Did the Judge Discharge a Juror and You Were Convicted?

Did the Judge Discharge a Juror and You Were Convicted?

From a practical perspective, no one except perhaps the defendant likes a not guilty verdict (also known as an acquittal).  It represents a trial the prosecution probably should have avoided and instead resolved via a dismissal, some form of diversion or an amended complaint to a lesser charge via plea bargain.

About This Article Briefly: Conviction reversed in triple homicide gang killing in Inglewood area after judge dismisses juror for refusing to deliberate.

After all, the prosecution (except for certain very limited circumstances) cannot appeal an acquittal due to double jeopardy fundamentals.  It can be frustrating for a prosecutor.  Judges sometimes appear frustrated too.

Even more problematic is when a judge is told a juror is not participating in the deliberations.  When this happens and the rest of the jury seems inclined to convict, the prosecutor may argue to have the juror removed.  After all, removing a barrier to a conviction avoids the chance of an acquittal.

The case of Craigen Armstrong epitomized this difficult situation for a judge to resolve.  Mr. Armstrong was allegedly involved in three separate incidents: two in September, 2011 and one in May, 2002, all involving a criminal street gang.  On September 27, 2001, he allegedly shot 21-year-old Christopher Florence near the intersection of Crenshaw Boulevard and 104th Street in Inglewood.  This was known as “the Bottoms” which was “owned” by the Crenshaw Mafia, a Bloods subgroup.  Armstrong was a member of the Crenshaw Mafia. 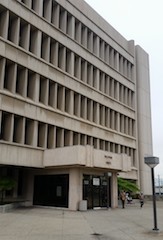 Inglewood Superior Court
Two days later, the brothers of the decedent went to the Bottoms to confront the shooters.  As they were stopped at the intersection of Century and Doty, Armstrong allegedly came alongside them while leaning out the rear passenger window of a car.  Armstrong allegedly pulled out a shot gun and shot into the brother’s car, killing two of the brothers.
The same night, after the shooting, Armstrong met Ms. Tyiske Webster, who was driving by.  Armstrong then drove by the scene of the shooting and allegedly told Ms. Webster, “I did that.”  He told her as he pulled up alongside the other car, he asked them, “where you from?” and then “let them have it.”

Police then found the car driven in the second shooting, searched the car and found a loaded nine-millimeter pistol.  Ballistics analysis of the bullets recovered from both prior shootings indicated the pistol was the one used.  Armstrong was then arrested.

Seven months more then passed after the arrest of Armstrong.  Ms. Webster was seven months pregnant at the time.  Armstrong’s brother and three others found Webster at a hotel and threatened to beat her if she testified against Armstrong.  Armstrong then called his brother and spoke directly to Webster, asking her why she had not deposited money into his account at jail.

Webster told Armstrong she would do so if the men left her alone.  Armstrong then got on the phone with his brother again and allegedly told his brother to “oop” her, which meant to kill her.  The brother and the other men then lit some wooden sticks and burned her over 140 times on her body, punched her and strangled her before leaving.

Armstrong had previously been charged with first degree murder of each of the three brothers as described in the two incidents laid out above.  In each killing, it was alleged that special circumstances applied, specifically that each killing was committed by Armstrong while a member of a criminal street gang and by discharging a firearm into a motor vehicle.  He was also charged with attempting to intimidate a witness, Ms. Webster.

The trial came to a close and the case was then submitted to the jury.  During jury deliberations, the jury foreman advised the judge that the jury had deadlocked on all counts and that one juror was not objectively considering the evidence and harbored possible biases against the police.  The juror also apparently looked at her cell phone messages during deliberations for about one minute and “also looked at a book one or two times for a few minutes.”

The judge discharged the juror for refusing to deliberate.

Armstrong was then convicted, sentenced to death and appealed on many, many grounds.  This article will only address his argument that insufficient grounds existed to discharge a juror.

The case made its way all the way up to the California Supreme Court, which agreed with Armstrong that the judge abused his discretion is discharging the juror.  The standard for discharging a juror involves a “heightened standard” requiring that the juror’s inability to perform his or her duty “appear in the record as a demonstrable reality.”  Here, merely looking at a cell phone for one minute and a book for a few minutes was not enough to show a demonstrable reality of inability.

As the error was prejudicial, the entire judgement was reversed for Armstrong.  Retrial, however, was not barred by the double jeopardy clauses of the state and federal Constitutions, so surely the prosecution would seek to re-try Armstrong quickly.
The citation for the California Supreme Court ruling discussed above is People v. Craigen Armstrong (2016) 1 Cal.5th 432.
For more information about juror issues, please click on the following articles:
Contact us.