Home
Other Information
Criminal Defense Articles
In Selecting a Jury, Who Is an Ineligible Juror and Why?

In Selecting a Jury, Who Is an Ineligible Juror and Why?

What to Take Away: An ineligible juror is anyone who lacks the right to serve on a jury, whose rights to do so have been taken away due to certain convictions or anyone who cannot meaningfully participate in deliberations.

It is important to distinguish an ineligible juror from one who simply cannot be impartial due to a life experience, a strong religious belief, a loyalty to law enforcement due to a family member or friend being in law enforcement or some other factor that prevents that juror from hearing all the evidence before making a judgment as to defendant’s guilty or innocence or who cannot follow the jury instructions given by the judge.
By far, the most common factor disqualifying a potential juror from serving on a jury, especially in Southern California, is the juror’s ability to communicate in English.  This is a challenge for cause.  After all, there are 224 languages recognized in Los Angeles (source: David Hoffman, The Law Governing Juror Qualifications, The Advocate, January, 2018).
An inability to communicate in English is significant because the juror may be unable to deliberate in a meaningful way with other jurors and is minimized by the other jurors who do understand English well and do deliberate.  Then the juror with poor command of the English language just votes along with the majority to avoid having to defend her or his position and face embarrassment in trying to articulate why he or she disagrees with the others. 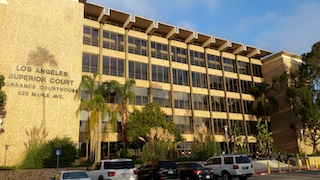 Torrance Courthouse
Making matters worse, judges often do not want to remove someone from the panel for poor English proficiency, as it can make the judge appear prejudicial.  This is especially so for judges who face re-election to their position.  They do not want to brand a juror as incompetent for having poor English.  The judge may try to force counsel to accept the juror because the juror has lived in the United States for many years, the juror seems “Americanized,” or is well-educated (although perhaps in a language other than English).
If counsel is concerned with a juror’s lack of proficiency with English, the challenge for cause must be carefully asserted.  It is not enough to simply tell the judge that the prospective juror has a thick accent or that the juror misunderstood several questions.
Instead, counsel should ask about the prospective juror’s English education, the juror’s use of English at home, the frequency of writing in English, the use of English at work, the use of English in the juror’s social life and the percentage of work the juror does with people who do not speak English.  It would be further good to know if the person listens to radio stations that use English and if the television stations the person watches are in English.
After asking the juror such questions, ask the juror what percentage of the questions he or she understood and felt comfortable answering.  If the juror struggles to answer this question, the juror’s English proficiency is clearly deficient, or if the answer is obviously wrong, this can be helpful.  One can solidify the point with the judge by asking the juror to further quantify what percentage of the other juror’s answers the juror did not understand.
If the estimated percentage seems too high, counsel can ask follow-up questions about what another juror stated to test the inflated percentage.  If the juror gives the “deer-in-the-headlights” expression, that should suffice to request the judge remove the prospective juror for cause.