Most of us understand that the right to confront one’s accusers is a fundamental right guaranteed by the Sixth Amendment to the U.S. Constitution and is made applicable to the states via the Eleventh Amendment.  In this context of “accuser,” the general understanding is that this right applies during trial, at which time a jury or judge will determine guilt or innocence.
However, the Sixth Amendment right also applies to when an expert testifies in the penalty phase to his or her opinion of how dangerous defendant is.  In 1981, the ruling in Estele v. Smith (1981) 451 U.S. 454 was issued, setting forth this right.

Why This Article Matters: The Sixth Amendment right to cross-examine a witness being offered against one applies throughout trial, including the right to cross examine an expert witness for the prosecution during the penalty phase.

In Estele, Dr. James Grigson was appointed by a Texas trial court judge to examine capital defendant Ernest Smith to determine his competency to stand trial.  Grigson examined Smith for about 90 minutes and determined that he was competent.  Grigson gave Smith no Miranda warnings (about Smith’s right to remain silent or have an attorney present) and Smith did not have his attorney present.  In fact, Grigson did not tell Smith’s attorney that he would examine his client.
Dr. Grigson then testified, over objection, during the penalty phase of Smith’s trial as to his future dangerousness.  Grigson testified that Smith was a “very severe sociopath;” that Smith “will continue his previous behavior;” that Smith’s sociopathic condition will “only get worse;” and that there “is no treatment, no medicine . . . that in any way at all modifies or changes his behavior.”  The jury then returned a verdict of death.
The U.S. Supreme Court held that Grigson’s testimony violated the Fifth and Sixth Amendments.  The Court held that the Fifth Amendment privilege against self-incrimination applied and that Miranda warnings were required because “Dr. Grigson’s prognosis as to future dangerousness rested on statements Smith made . . . in reciting the details of the crime.”  “When Dr. Grigson went beyond simply reporting the court on the issue of competence and testified for the prosecution at the penalty phase on the crucial issue of respondent’s future dangerousness, his role . . . became essentially like that of an agent of the State.”
The Court held that the Sixth Amendment right to counsel thus applied because “adversary judicial proceedings” had been initiated against Smith and that Grigson’s interview was a “critical stage” of the proceedings.
The Estele holding is important to a 2017 ruling made by the U.S. Supreme Court in Tracy Petrocelli v. Renee Baker, Warden (2017 DJDAR 6605).  In 1982, one year after Estele was issued, Petrocelli was convicted and sentenced to death in Nevada state court for the robbery and first-degree murder of James Wilson, a Nevada used car salesman after going on a test drive of a Volkswagen pickup truck with Wilson.
Wilson’s body was found buried in a crevice under some rocks near Pyramid Lake.  The lake is about 35 miles north of Reno. 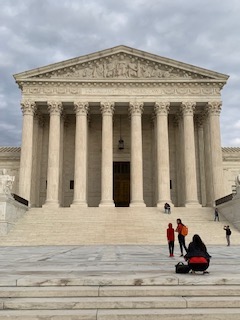 U.S. Supreme Court
In order to render Petrocelli death-eligible, Nevada had to establish at least one aggravating factor.  During the penalty phase of Petrocelli’s trial, the State sought to establish two such factors: (1) that the murder had been committed in the course of a robbery, and (2) that Petrocelli had previously been convicted of a violent felony, the kidnapping of his girlfriend Melanie Barker.
The defense then called three mental health professionals to testify, each of whom testified that with proper treatment, he could learn to control his impulses and overcome his homicidal outbursts of rage.
The prosecution called Dr. Gerow to the stand.  Defense counsel objected on the grounds of psychiatrist-patient privilege, but the court overruled the objection.  Gerow also interviewed Petrocelli without giving any Miranda warnings.  Gerow then testified that he had interviewed Petrocelli for two hours and formed an opinion that Petrocelli definitely had “an antisocial personality.”  Gerow referred to Petrocelli as having a psychopathic” personality that is rare and that Petrocelli is someone who is “very callous and selfish, someone unreliable and irresponsible.”
He testified that individuals with psychopathic personalities “are repeatedly in trouble with the law,” because they “don’t believe in the rules that society set up” and do not learn from punishment.  He then testified that “there is no treatment at all” for psychopathic personality, that the condition worsens during adolescent years, and that it “persists throughout life.”
Petrocelli filed numerous appeals and habeas petitions over the years, eventually arguing that there was an Estele violation.  The U.S. Supreme Court agreed, reversing the sentence of death and remanding the case back to the trial court for a new penalty phase of trial or to impose a lesser sentence consistent with the law.
The citation for the United States Supreme Court ruling discussed above is Tracy Petrocelli v. Renee Baker, Warden (2017) U.S.  S. Ct.  , L. Ed. 2d.
For more information about confrontation rights, please click on the following articles:
Contact us.
Serving Torrance, Long Beach, Compton, Airport Courthouses and Other Courthouses.