Senate Bill 620 became effective on January 1, 2018.  It amended Penal Code § 12022.53(h) to give trial court judges discretion to strike a sentencing enhancement otherwise imposed under 12022.53.  This new law garnered tremendous news attention as a way to reduce otherwise extremely long sentences that had the practical effect of life without the possibility of parole and our office received dozens of phone calls asking if the new law was considered retroactive (it is not).
While its retroactive applicability was clarified before the law even went into effect, other areas of the new law were yet to be ironed out.  The following summary of a Second Appellate District opinion involving Armando Garcia exemplifies just one aspect of the new law that was not applied correctly, but a higher court weighed in to provide guidance and fix the situation.

Brief Synopsis: Senate Bill (SB) 620 allows a trial court judge, in sentencing defendant when a firearm is involved in the crime, to strike the firearm enhancement, which can be many years.  Defense counsel is permitted to argue that the judge should such discretion to strike the enhancement in sentencing.

In the Clara Shortridge Foltz downtown criminal courts building, a jury found Defendant Armando Garcia guilty of first-degree murder (Penal Code § 187(a)) and found true a gang enhancement (Penal Code § 186.22(b)) and a firearm use enhancement (Penal Code §§ 12022.53(d) and (e)).
The trial court judge found true a prior serious felony allegation (Penal Code § 667(a)(1)) and a prior strike allegation (Penal Code §§ 667(b)-(j), 1170.12).
Accordingly, the trial court judge sentenced Garcia to 80 years to life in prison, consisting of 25 years to life for the murder conviction, doubled due to Garcia’s prior strike, plus 25 years to life for the firearm use enhancement and five years more for the prior serious felony.
Before his conviction and sentence was considered final, Senate Bill 620 became effective and Garcia filed a petition for review of his sentence. 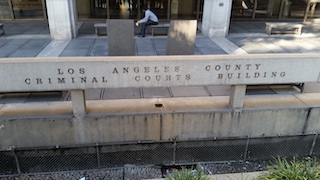 Clara Shortridge Foltz CCB Courthouse
The case was then remanded to the trial court to reconsider imposition of the firearm enhancement under Penal Code § 12022.53(h).  The trial court judge then called the case “on hearing for remittitur.”  The prosecutor was not present.  Defendant was not present.  Defense counsel was not present.
The trial court judge then issued a written ruling stating it would not change defendant’s sentence.
Defendant then appealed this ruling, arguing that he had a constitutional right to be present with counsel at such a hearing.  The appeal went up to the Second Appellate District, which agreed with Garcia, ordering the case back to the trial court with instructions to the trial court judge to have defendant and his counsel present at the hearing (2019 DJDAR 1359).
The reasoning explained by the appellate court is that the constitutional right to counsel exists “at all critical stages of a criminal prosecution, including sentencing.”  People v. Doolin (2009) 45 Cal. 4th 390, at 453; see also People v. Rodriguez (1998) 17 Cal. 4th 253, 257 (finding that defendant had the right to be present at a “Romero motion” hearing to strike a prior strike conviction for purposes of sentencing) (People v. Superior Court (Romero) 13 Cal.4th 497.

Both the state and federal constitutions afford a defendant the right to be present at all critical stages in a criminal proceeding.  People v. Willen (2008) 165 Cal.App.4th 270, 286
.
The appellate court went on to distinguish this right, saying defendant does not have the right to be present at every hearing held in the course of trial; the touchstone is “whether the proceeding bears a reasonable and substantial relationship to his or her full opportunity to defend against the charges.”  People v. Wallace (2008) 44 Cal.4th 1032, 1052.
Accordingly, the case was remanded to the trial court judge to decide, at a hearing at which defendant has the right to be present with counsel, whether the judge will exercise his discretion to strike the firearm enhancement under Penal Code § 12022.53(h) and/or the prior conviction enhancement under Penal Code § 667(a).
We think this ruling is good because, while certain judges may have imposed the firearm enhancement under Penal Code § 12022.53(h) with some reluctance (although the victim(s) and or the victim(s) family certainly appreciated such punishment being imposed), there is no doubt that sentencing is a critical phase of any criminal proceeding and defendant should be allowed the opportunity to be heard at such a hearing, if not for any other reason than to prevent rulings that are simply asking a judge to review his or her prior ruling (which very few will reverse).
For more information about sentencing enhancements, please click on the following articles:
Contact us.
Serving Torrance, Long Beach, Compton, Airport Courthouses and Other Courthouses.