Burglary is an unauthorized entry into a building with the intent to commit a felony or theft therein.  This must be proven beyond a reasonable doubt.

In 50 Words or Less:  Conviction Reversed for Commercial Burglary Even Though Broken Glass Found at Scene with Defendant’s DNA on Rock Inside.

In December, 2009, An Loc Dinh Bui arrived at work at his nail salon that he and his wife owned.  The nail salon was on Tustin Avenue in Santa Ana.  The front window to the salon was broken and the door unlocked.

Bui went in and found $200 missing, as well as a CD player and a DVD player gone.  He then called the police, who found a baseball-sized rock underneath a nail station in the salon.  Police suspected the rock was used to break the window and enter the salon. 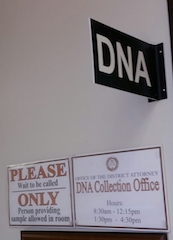 DNA Collection Office Orange County
Police swabbed the rock for DNA.  It matched the DNA of Pedro Arevalo, who was then arrested.  Based on only the DNA match, the Orange County District Attorney charged Arevalo with felony second degree commercial burglary (Penal Code § 459).
At trial, the detective testified that swabbed the rock for DNA, as he did not think it belonged in the business.  A DNA expert testified as well, explaining that someone’s DNA could remain on a rock for a year and that she had no idea when the DNA was posited on the rock.  Nevertheless, the Orange County jury found Arevalo guilty of the crime.

Arevalo appealed, arguing the DNA evidence linking him to the burglary was insufficient to support his conviction.  The Fourth Appellate District, in People v. Pedro Arevalo (2014 DJDAR 4659) distilled down the issue to “whether Arevalo’s DNA on a rock at the crime scene is, by itself, sufficiently substantial to allow any rational trier of fact to infer beyond a reasonable doubt Arevalo committed the burglary.”

The Fourth Appellate District noted that its job, in reviewing a sufficiency of the evidence appeal, was to view the evidence in the light most favorable to the verdict.  It was to determine, in reviewing the whole record, whether the evidence was substantial, meaning “reasonable, credible and of solid value.” People v. Curry (2007) 158 Cal. App. 4th 766, 778.

“Substantial evidence,” it noted, requires evidence and not mere speculation.  In Arevalo’s case, it emphasized that Arevalo’s case was a “DNA – only case.”  The court then looked to analogous finger print-only cases, such as Mikes v. Borg (9th Cir. 1991) 947 F.2d 353.

The Ninth Circuit, in Mikes, held that in “finger print-only” cases, the trier of fact (the jury or judge) must be able to find that the fingerprints were caused or pressed onto an object during the commission of the crime, not before or after.  The court in Mikes found that defendant’s fingerprints on a murder weapons were not enough to convict defendant without proof that defendant used the gun during the murder; “otherwise any conviction would be based on pure speculation.” Mikes, supra, 947 F. 2d at 357.

In Arevalo’s case, the prosecution failed to offer any evidence of a time-frame for when the DNA was transmitted onto the rock or how long the DNA had been on the rock.  The DNA expert even testified that the DNA could be on the rock for a full year under certain circumstances.

As such, the conviction was set aside.  Arevalo must have been quite happy with this.
The citation for the Fourth Appellate District ruling discussed above is People v. Arevalo (4th Dist., 2014) 225 Cal.App.4th 612, 170 Cal.Rptr.3d 286.
For more information about commercial burglary, click on the following articles:
Contact Greg Hill & Associates