Conviction Reversed for Burglary by Acetylene Torch at Store

In the early morning hours of June 3, 2008, a silent alarm was triggered at a Murietta Best Buy.  Police arrived and found “a large hole cut in a side steel door leading into the store that appeared to have been made by a torch.”

The Reader’s Digest Version:  Burglary by use of an acetylene torch (Penal Code § 464) requires a finding that defendant used such a torch to enter a building.  The following case resulted in a not guilty verdict when such a torch was only used to open an exterior door and not after entering the building.

Inside the store, police found a locked camera cabinet that had been forced open.  A store security video showed a man in a hooded sweatshirt taking video recorders and cameras worth approximately $24,600 from the cabinet. 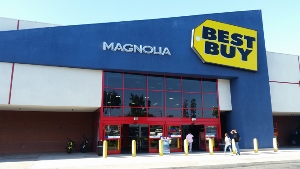 Police spotted an individual, later identified as Gabriel Anthony Cardwell, near the store in a concrete flood control channel.  He was pulling two shopping carts behind him.  As police approached the man, dressed in a hooded sweatshirt, he pushed the shopping carts off an embankment and ran towards the I-15 Freeway.  As police ran after him, he yelled, “I have a gun.  I’ll fucking shoot!”  Police later apprehended the man near a U-Haul van, with its hood warm to the touch.

Police found a backpack near the man.  It contained a hatchet, a hacksaw, a bolt cutter and a crowbar.  In the van, police found two gas canister tanks and an acetylene base cutting torch, as well as a water bottle that had Cardwell’s fingerprints on it.  Police later determined that Cardwell had rented the van.

In the first trial, the jury deadlocked and a mistrial was declared.  In the second trial, Cardwell was convicted of all counts.

Cardwell then appealed, arguing that his burglary conviction under Penal Code § 464 must be reversed because the evidence did not show he used an acetylene torch to open any vault, safe or other secure place, as the text of 464 reads.  Cardwell argued that the evidence only showed that he used the torch to cut a hole in the exterior door.

In People v. Gabriel Anthony Cardwell (2012 DJDAR 2319), the Fourth Appellate District agreed, reversing the conviction.  Finding that the issue really was one of statutory interpretation, the Court looked at the wording of Penal Code section 464, which states:

Any person who, with intent to commit crime, enters, either
by day or by night, any building, whether inhabited or note, and
opens or attempts to open any vaults, safe, or other secure place
by use of acetylene torch or electric arc, burning bar, thermal
lance, oxygen lance, or any other similar device capable of burning
through steel, concrete, or any other solid substance, or by use
of nitroglycerine, dynamite, gunpowder or any other explosive,
is guilty of a felony. . .

Looking at the evidence presented, the Court of Appeal first agreed with Cardwell that “other secure place” does not include a building such as a Best Buy store.  Next, the Court made the key holding that a prerequisite for the crime is first entering a building, which Cardwell did not first do before he used his acetylene torch to the exterior door.

Consequently, the conviction of violating 464 was reversed and the case was remanded back to the Riverside County state court judge for re-sentencing as to Cardwell’s conviction on the other counts.
The permanent citation for the appellate court decision is People v. Gabriel Anthony Cardwell (2012) 203 Cal.App.4th 876, 137 Cal.Rptr.3d 525.
For more information about burglary, click on the following articles:
For case summaries of selected theft cases our firm has handled, click here.